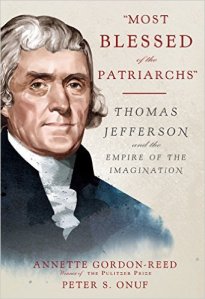 I’ve tried for many years to read an American history book around the 4th of July.   This year I read Annette Gordon-Reed’s “Most Blessed of the Patriarchs”: Thomas Jefferson and the Empire of the Imagination .   I was trying to gain some understanding of how Jefferson was able to on one hand declare that “all men were created equal” and yet be a slave owner.  The book does deal with this issue, but I’m not sure I understand it any better for having read the book.  What I learned from the book was that Jefferson had actually penned (for example in his NOTES ON VIRGINIA) some searing critiques of slavery and how it demeaned and dehumanized the slave owners turning them into inhumane tyrants.  But he then seems to have imagined himself to be some sort of benevolent slave owner with his slaves actually being happy to be part of his patriarchal estate.  Gordon-Reed writes:

Would moneymaking Virginians like Jefferson himself overcome their self-interest in order to secure the commonwealth’s republican future? Laws shaped manners, as their sequence in Notes on Virginia suggested, and educating, emancipating, and then expatriating Virginia’s slaves was the only guarantee that the younger generation would not be “nursed, educated, and daily exercised in tyranny” and so be “stamped” by the institution with its “odious peculiarities.”  (Kindle Location 2334-2338)

Jefferson writes that slavery ruins the morals of the children of slave owners, and that slavery needed to be abolished, and yet he loved his landed gentry lifestyle and was not so moved to free his slaves or even to provoke his fellow white slave holders by taking a firm stand against slavery.  He despised the wealthy class of Europe because their elite lifestyle was based in the oppression of the masses.  But Jefferson was willing to enslave some people in order that others like himself could have a comfortable lifestyle – to live like a patriarch.  He was indeed a child of and slave to the Enlightenment and entitlement.  He imagined the American gentry owning large parcels of land and thus maintaining their personal independence (thus he saw himself as a most blessed patriarch).  The state was to stay out of the affairs of personal estates.  Slavery was thus a personal thing for the gentry class, beyond the rule of the state since the state had to respect and protect the privacy and freedom of the gentry class.  His personal failure to deal with the issue of slavery, condemned countless thousands of human beings to the dehumanizing effects of slavery in our country.  A price for that was eventually paid by the nation in the civil war.  Jefferson actually contributed to all that suffering by not being willing to live by his own moral standards.   He saw slave owning as an evil that he was willing to benefit from.

Despite the slaves, he still couldn’t make his plantation run profitably.  He didn’t live within his means, which is maybe one of the sad legacies of Jefferson that the American government and peoples embodies today.  As he aged, his children and grandchildren worked hard (read: enabled!) to allow Jefferson to live his fantasy even as his entire plantation enterprise was financially failing.  Upon his death, they ended up selling just about everything to pay his debts.  None of this takes away from his great contribution to the American revolution or the shaping of the American way.  It only says that his personal vision of life for the gentry was unsustainable with or without slavery.  His failure on this level though also condemned so many to slavery, so the price was very high.

A couple of random quotes from the book.  Jefferson did fear that the American revolution would be undone by people trying to create a European style upper class – an imperial class.  [But of course he didn’t seem to think the slave-holding gentry were like this! Indeed in Europe slavery had already been abolished].

But what if that “spirit” waned, as Jefferson had feared it might after independence was won? “From the conclusion of this war we shall be going down hill,” he warned: rights will be “disregarded,” and Virginians will “forget themselves, but in the sole faculty of making money.”   (Kindle, Location 2326-2328)

Jefferson feared greed might be the undoing of American independence.  People would make wealth the highest good and be willing to sacrifice their independence from oppressive government as long as they became wealthy.  He felt independence required an ongoing fight and revolution.  Not sure what he would have made of the modern belief that we should be able to be both rich and independent and that independence requires no sacrifice, no price. 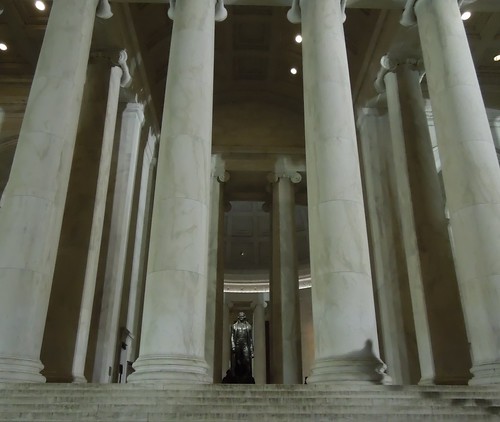 And for our presidential election year, this thought:

The success of America’s republican experiment thus depended on transparency and responsibility: politicians were the people’s “servants,” not their masters, and they should certainly not allow themselves to be influenced by would-be courtiers.  (Kindle Location 2925-2927)

Now elections are all about money and those with money have inordinate amount of influence and power in elections.  The Supreme Court has decided that money talks in elections, and this is free speech.  Jefferson, I think, would have been puzzled by our willingness to let money control our politicians.

Lastly, wisdom for us to consider on many levels.

One is reminded of the words that the Roman historian Tacitus puts into the mouth of a Caledonian general, criticizing the Romans and their depredations in Scotland: ubi solitudinem faciunt, pacem appellant—“they make a desert, and they call it peace.”  (Kindle Location 1197-1199) 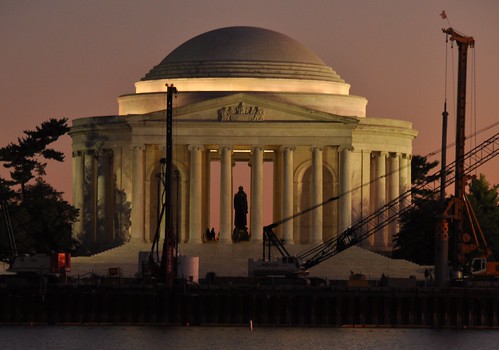