Sts Boris and Gleb were sons of St Vladimir, Enlightener of Russia. After their father’s death the eldest son Sviatopolk planned to kill his brothers Boris and Gleb in order to seize power. He sent a message to Boris, pretending that he wished to live in peace with him, and to increase Boris’s land holdings inherited from their father.

Some of Vladimir’s advisers told Boris that he should take the army and establish himelf as ruler of Kiev. St Boris, however, said that as a Christian he could never lift his hand against his own brother. Unfortunately, Sviatopolk was no Christian and had no such moral thinking.

Sviatopolk sent assassins to kill Boris, who already knew that his brother wanted him dead. When they arrived they heard him chanting psalms and praying before an icon of Christ. He asked the Lord to strengthen him for the suffering he was about to endure. He also prayed for Sviatopolk, asking God not to count this sin against him. The assassins stabbed him with their lances, and also killed some of Boris’s servants.

After Sviatopolk had killed Boris, he sent Gleb a message that he wished to see him. Gleb though also received word that their father had died and that Sviatopolk had murdered Boris.  St Gleb wept for his father and brother, and was lamenting them when the assassins arrived. They seized his boat and drew their weapons, but it was Gleb’s own cook who stabbed him with a knife.  Later, he was buried beside St Boris in the church of St Basil. 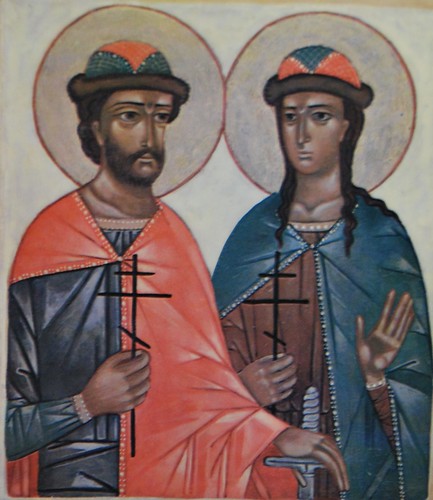 Sts Boris and Gleb received the crown of martyrdom in 1015. They became known as Passion-Bearers, since they did not resist evil with violence.  They are commemorated on July 24 each year.    (Excerpted from the OCA webpage, Lives of the Saints)

Greater love has no man than this, that a man lay down his life for his friends.  (John 15:13)