I will admit that I often don’t find the Orthodox lives of the saints very helpful to my life struggle to be a Christian.  There are many reasons for this, including my own sinfulness and laziness.  The hagiographies I find most helpful are ones that present a real human being, a sinner who struggles in life, wrestling with sins, with self, with God.  My life is much closer to the sinner than to a great hesychast ascetic.  With the Publican, I pray, “God be merciful to me, the sinner.” 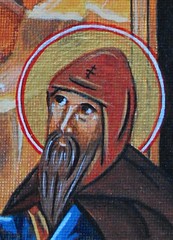 The extant Orthodox hagiographies frequently represent the ideals of those who wrote them – they reflect the times and communities of the authors – they were medieval monks writing for other monks.  As is to be expected their value systems are not necessarily my own.  Over time, Orthodox hagiographies tended to turn every saint into a monk.  The aspects of life that appealed to those who wrote the lives of the saints were those things that made heroes of the extreme ascetics or which reflected monastic values.  I find them often being so inimitable to be of little inspiration or value to my life.

Hagiographies in Orthodox history also became stylized and formulaic, and the more that happened the less valuable the lives become in giving us the life of a real person who struggles with their faith.  [Not only the hagiographies themselves, but the hymns about the saints – the troparion – also became formulaic so that there are general hymns that are used for all the saints of the rank.  You can look up the generic hymns and put any name into them].  The lives often are not very reliable for the “history” of the saints.  They became filled with miracles and feats of ascetic extremism because these things appealed to the monastic authors of the hagiographies.  They needed lives of people who accomplished great ascetical feats rather than lives of parents, spouses, laborers, merchants, neighbors and laity who strive to be Christians in the world   It almost became mandatory that certain miracles appear in the lives of the saints, or they weren’t considered to be a real saint.  As this formulaic approach continued, it seems as if anything even remotely “negative” about the saint had to be expunged, and only the miraculous could be reported, again taking away from them the ability to be models that we could imitate.  And in a modern world of skepticism, it often calls into question everything about the saints.  The worry for the hagiographers was that if there weren’t an abundance of miracles, people would be scandalized and think these holy ones weren’t true saints.  But in the modern world, the excess of miracles seems like magic and calls into question whether any aspects of these hagiographies are true. 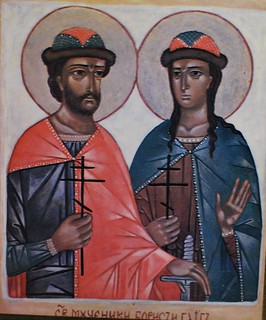 Yesterday, on our Church calendar we find the Holy Passion-Bearers and Martyrs Boris and Gleb.  If you click on the link, you can read a very abbreviated story of their lives.  The two were brothers, sons of St Vladimir, Enlightener of Russia.  Their grandmother, St. Olga, is also recognized as a saint in the Orthodox Church.   The lives of Sts Boris and Gleb are for Orthodox Christians both inspiring and daunting.  For Orthodox parents they remind us of the reality of life – our children grow up and they may or may not choose to follow the Orthodox faith.  “Success” from an Orthodox point of view may be very different than what most parents wish for their children.

Boris and Gleb both embrace the Orthodox Christianity that their grandmother and father adopted and promulgated.  They made it part of their own lives, and they paid the price for deciding to live the faith, for both are martyred soon after their father’s death. 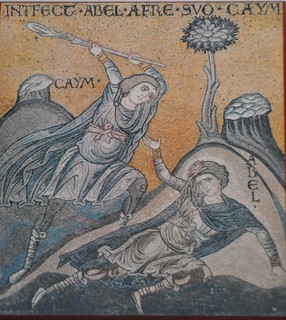 Their lives and their deaths are reminiscent of the biblical story of Cain and Abel.  Though Abel’s sacrifice is favorable to God, and Abel seems to be the blessed one of the two brothers, he ends up murdered.  His brother Cain, whose sacrifice was not acceptable to God, actually gets to speak with God, unlike Abel.  Being God’s favored one, did not protect Abel from the evil his brother intended.  His brother, Cain, the murderer, even convinces God to protect him from too much punishment!

So too, Boris and Gleb, upon their father’s death, realizing the way their people would choose a successor to their father was by might and war, both decide that now as Christians, they will not raise arms against their brother, Sviatopolk.   Sviatopolk knows his brothers, and even knowing that they would not resist him, commits fratricide.  Boris and Gleb realize full well that Sviatopolk has no moral qualms about murdering them.  Yet they choose not to resist evil with evil: they hold on to their Christian faith and die rather than commit murder themselves.

“Repay no one evil for evil, but take thought for what is noble in the sight of all. If possible, so far as it depends upon you, live peaceably with all. Beloved, never avenge yourselves, but leave it to the wrath of God; for it is written, “Vengeance is mine, I will repay, says the Lord.” No, “if your enemy is hungry, feed him; if he is thirsty, give him drink; for by so doing you will heap burning coals upon his head.” Do not be overcome by evil, but overcome evil with good.” (Romans 12:17-21)

So for St. Vladimir, two of his three sons embrace Christianity to the full extent of their lives – and both end up murdered. They are true Christian martyrs.   The one son who is not motivated by Christianity, inherits the princedom of his father.

For Christian parents, we see the grief that Vladimir would have experienced had he lived to see it – two sons murdered, but who kept the faith of Christ to the end of their short lives.  One son, who rejects Christ but becomes the prince of the land.  The son who lives, rejects the faith.  The two who are murdered become saints in the Church.  They are recognized as a special category of saint – passion-bearers.  They freely and willingly choose to die rather than to kill.  They accept martyrdom as the price to be paid for being Christian.

Had Boris and/or Gleb taken up arms and defeated Sviatopolk, we probably would consider them as justified for having defended themselves from a tyrant.  But had they done that, even though they might be considered as just men, they would not have been recognized as saints in the Church – the holy ones of God.  For holiness isn’t doing what normal people would do in self-defense and for self-preservation.  Holiness is imitating Christ in being willing to lay down their lives rather than take arms against a brother.  Here we see why some saints certainly thought the value of self-preservation often leads to sin – we cast aside moral values to preserve ourselves.  That is Sviatopolk, the murderer and fratricide.  Boris and Gleb the saintly martyrs reject self-preservation as being an ethical justification for behavior.

The lessons for us are many.  As parents, we hope our children will embrace the Orthodox Christian faith we have chosen for ourselves – like St. Vladimir did.  But we also recognize that embracing the Christian faith might mean martyrdom for our children.  Jesus certainly told us about this: “If you were of the world, the world would love its own; but because you are not of the world, but I chose you out of the world, therefore the world hates you. Remember the word that I said to you, ‘A servant is not greater than his master.’ If they persecuted me, they will persecute you…   I have said this to you, that in me you may have peace. In the world you have tribulation; but be of good cheer, I have overcome the world.” (John 15:19-20; 16:33)

We obviously do not wish suffering on our own children.  But if we will that they follow Christ, we should know that such a life comes with blessings as well as risks.

And we also see in the lives of these saints, another truth.  Even if one’s family is made up of committed Christians (converts!), even made up of saints, that doesn’t guarantee that our children will follow that path.  St. Vladimir had a son (with a truly saintly grandmother!)  who rejected the Christian faith, and he is the one who “succeeds” in life – he certainly succeeded his father’s princedom.

Then Jesus told his disciples, “If any man would come after me, let him deny himself and take up his cross and follow me. For whoever would save his life will lose it, and whoever loses his life for my sake will find it. For what will it profit a man, if he gains the whole world and forfeits his life? Or what shall a man give in return for his life? For the Son of man is to come with his angels in the glory of his Father, and then he will repay every man for what he has done.  (Matthew 16:24-27)

Even a saint can’t force their child to grow up and be a Christian.  And teaching our children Christian values may mean that they will have to choose martyrdom to stay faithful to Christ.

Finally, we see in the lives of such saints as Boris and Gleb that self-justifying ourselves by saying, “I had no choice,” can be a lie.   There is a choice, but we don’t always want to consider it, let alone chose it.  Boris and Gleb had no choice but to defend themselves, right?  No.  They had a choice, and that choice involved martyrdom.  They didn’t get to live and see the fruit of their choice, but Russian Orthodoxy blossomed on the tombs of the martyrs.  Choosing to live as Christians brought them no reward in this world.   Before ever justifying self-preserving behavior by saying, “I had no choice…”, think Sts. Boris and Gleb.  If we think some politicians “have no choice” but to vote with their party or to defend some position, think again.  There are choices and values we can make, like the beloved saints Boris and Gleb made.