In the Orthodox Church, Mary, the Virgin Mother of Christ and Theotokos, suffers death like all of us.   We remember that event in the Feast of her Dormition on August 15 each year. 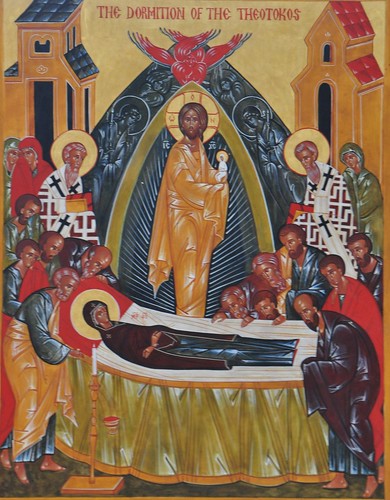 In Orthodoxy, all of humanity falls under the power of death – we are mortal beings as a result of sin – ancestral as well as our own.  In the theological reflection of the Church, Mary is viewed as the most unique and special human – the one whom God chose to be the mother of His Son.  What she must have been to be favored and chosen by God is what causes Orthodox theologians to elevate her status among humans.  She is not thought of as being some interchangeable part in God’s mechanical universe.  Orthodoxy does not believe if not Mary, than God would have chose Susanna or Elizabeth or someone else.  Mary was a unique human who lived a godly life and is recognized by God and favored by God because of the choices Mary herself made.  Mary is essential for our salvation.  In human terms, she is the pinnacle of the entire salvation history recorded in the Jewish scriptures, our Old Testament.  She represents the best fruit of what humanity was capable of producing.  God works with her for our salvation.  Thus she becomes Theotokos when the Word becomes flesh in her womb at the Annunication.  Her role in salvation is indispensable.  But she is still human, and so she dies, even though in her the incarnation, and thus salvation, has occurred.  It is not because she is sinful that she dies, but because she is human and thus mortal. 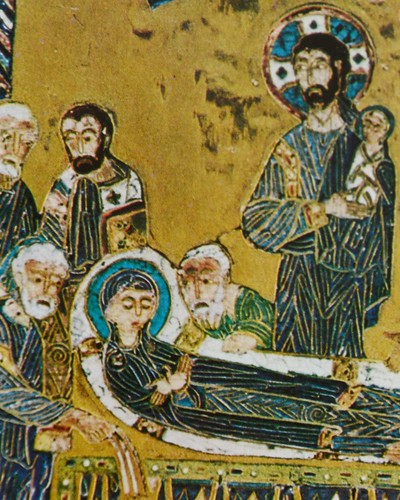 “Orthodox Christianity has not embraced a doctrine of the Immaculate Conception. It seems more consistent with the Gospel story that Mary, like the rest of humanity, was born into the sin of the first Eve. Otherwise, the importance of her humanity is diminished; she becomes merely a predestined instrument of grace, and the exemplary character of her achievements of humility and purity and freely pronounced willingness to be of service to God is less compelling. Nevertheless, it seems appropriate, if not also necessary, to add that by her birth-giving and motherly relationship to Jesus through the Holy Spirit, Mary overcame our sinful condition and became, by virtue of her special holiness, the mother of our salvation. 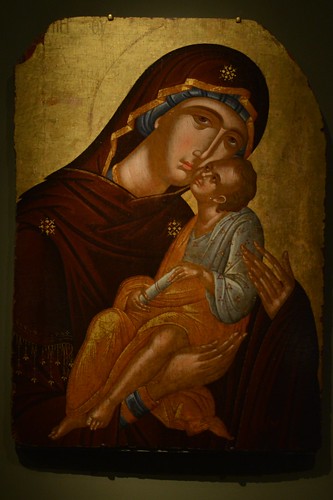 Irenaeus, Bishop of Lyons, raised two important lasting Marian themes: the one of the New or Second Eve, and the other of the Virgin’s fiat. In these, especially, rest the church’s claims about her centrality to the Christian understanding of holiness. Irenaeus writes,

‘And just as it was through a virgin who disobeyed that man was stricken and fell and died, so too it was through the Virgin, who obeyed the word of God, that man resuscitated by life received life. For the Lord came to seek back the lost sheep, and it was lost; and therefore he did not become some other formation, but he likewise, of her that was descended from Adam, preserved the likeness of formation; for Adam had necessarily to be restored in Christ, that mortality be absorbed in immortality, and Eve in Mary, that a virgin, become the advocate of a virgin, should undo and destroy virginal disobedience by virginal obedience.’”  (The Melody of Faith: Theology in an Orthodox Key, Kindle Loc. 681-85)