In the Gospel lesson of Matthew 14:22-34, we encounter Jesus walking on water. 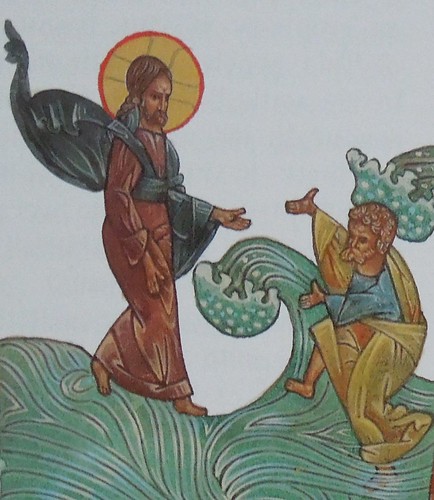 The Apostle Peter asks Jesus for permission to join Him in perambulating across the stormy sea.  At first, all goes well, but then Peter finds himself in a bit over his head, so to speak.  Peter discovers that being the Rock doesn’t help one to stay on the surface of the water.  Here is the Gospel lesson:

Then Jesus made the disciples get into the boat and go before him to the other side, while he dismissed the crowds. And after he had dismissed the crowds, he went up on the mountain by himself to pray. When evening came, he was there alone, but the boat by this time was many furlongs distant from the land, beaten by the waves; for the wind was against them. And in the fourth watch of the night he came to them, walking on the sea. But when the disciples saw him walking on the sea, they were terrified, saying, “It is a ghost!” And they cried out for fear. But immediately he spoke to them, saying, “Take heart, it is I; have no fear.” And Peter answered him, “Lord, if it is you, bid me come to you on the water.” He said, “Come.” 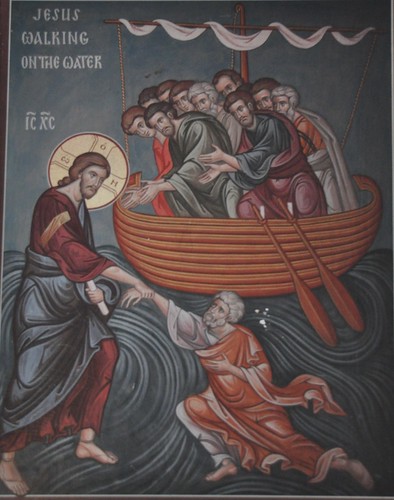 So Peter got out of the boat and walked on the water and came to Jesus; but when he saw the wind, he was afraid, and beginning to sink he cried out, “Lord, save me.” Jesus immediately reached out his hand and caught him, saying to him, “O man of little faith, why did you doubt?” And when they got into the boat, the wind ceased. And those in the boat worshiped him, saying, “Truly you are the Son of God.” And when they had crossed over, they came to land at Gennesaret.

Jesus clearly favored Peter among the Twelve, though Peter is not the disciple whom Jesus loved – that was John.  Peter though has a favored status, even a leadership position among the chosen apostles.  Jesus recognizes Peter as the rock, and I still have to think that the disciples ultimately might have found it amusing that Peter also sank like a rock when he so boldly asked to walk on the sea with Jesus. 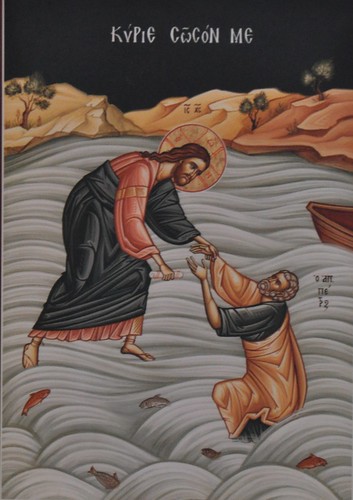 Fr. Paul Nadim Tarazi makes an interesting observation about walking in the bible.

“The scriptural ‘walking’ is not done with one’s feet. Rather, it is a way of life that one has to decide for one’s mind.” (The Chrysostom Bible: Romans, p 141)

By this we may be sure that we are in him: he who says he abides in him ought to walk in the same way in which he walked.  (1 John 2:5)