“For the word of God is living and active, sharper than any two-edged sword, piercing to the division of soul and spirit, of joints and marrow, and discerning the thoughts and intentions of the heart. And before him no creature is hidden, but all are open and laid bare to the eyes of him with whom we have to do.”   (Hebrews 4:12-13)

Previous post in this series: Interpreting the Scripture (II)

In the previous blog we encountered how the Patristic writers saw the interaction between the Scriptures and readers of the Bible when those reading held false or distorted ideas about God.  In the end, their interpretations of the Scriptures were also distorted.  To have the right relationship with the Word of God, one must have right faith, and have a heart and mind committed to serving God.  In this post, we will look at some other issues Orthodox teachers have noted about relating to the Word of God – not the Bible text, but to the living Word who interacts with us. 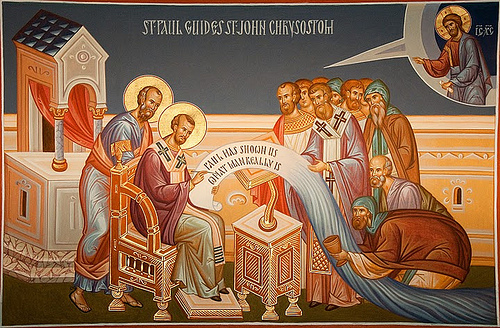 First, a comment from St. Augustine admitting that it is possible that some texts in the Bible may have had a specific meaning to the author of the text and to those to whom the text was originally written, but we no longer know, or even can know that meaning.  History now separates us from those in the original discussion and we don’t know (and can’t know) all of the circumstances, meanings and nuances of those texts.  Scholarship cannot uncover some things which have been lost to history.  Augustine writes:

The words, “And now you know what is restraining”—i.e., you know what hindrance or cause of delay there is—“that he may be revealed in his own time” [2 Thess 2:6], show that he [St. Paul] did not make an explicit statement, since he said that they knew. But we who do not have their knowledge wish, but are unable even with great effort, to understand what the apostle referred to, especially since his meaning is made still more obscure by what he adds. For what does he mean when he says, “The mystery of lawlessness is already at work; only He who now restrains will do so until He is taken out of the way. And then the lawless one will be revealed” [2 Thess 2:7–8]? I frankly confess I do not know what he means. ”  (A Patristic Treasury: Early Church Wisdom for Today, Kindle Loc. 5909-14)

St. Augustine was willing to acknowledge, what many pastors and biblical commentators today will not admit, that the meaning of a passage is beyond us.   Today, many biblical commentators fear that to acknowledge there are things in the Scritpures we do not know, or even cannot know, might cast doubts on their interpretation of things.  And the reason is because truthfully it is their personal interpretation of the Scriptures, rather than what the Scriptures actually say.  These commentators really are saying that God is not smarter than they are, that is why they understand everything the Scriptures say.  But if the Word of God is active and alive, the Word may interact with some people, some who are no longer with us, revealing His full meaning.  But that meaning is no longer ours to have.  It means we have to stand silent in the face of certain Scriptures.  We must be humble before God and neighbor recognizing that the Scriptures really do contain the mysteries and revelation of God, yet we might not be the people to fully understand them. 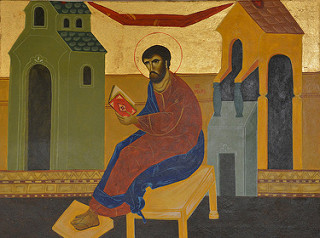 Acknowledging that the Scriptures might still have hidden in them the Word of God but that we cannot access the meaning of those texts takes away from all of us the arrogant claim that we alone know the full meaning of all the Scriptures.  The saints through the centuries realized there are many reasons why we might not fully understand some passages of Scripture.   Just because we are able to discern the meaning of a word or name or thing in Scripture at one point in the text, means we fully understand that word or name every time it is used in the Bible.  The Word is living, and consequently, the Word may have different connotations in different passages and in the minds of the different authors using the words.  St Maximos the Confessor expounds:

“Not all persons and things designated in Holy Scripture by the same word are necessarily to be understood in exactly the same way. On the contrary, if we are to infer the meaning of the written text correctly, each thing mentioned must clearly be understood according to the significance that underlies its verbal form. If always understood in the same way, none of the persons, places, times, or any of the other things mentioned in Scripture, whether animate or inanimate, sensible or intelligible, will yield either the literal or spiritual sense intended. Thus he who wishes to study the divine knowledge of Scripture without floundering must respect the differences of the recorded events or sayings, and interpret each in a different way, assigning to it the appropriate spiritual sense according to the context of place and time.”   (THE PHILOKALIA, Kindle Loc. 19118-26)

“Pilate is a type of the natural law; the Jewish crowd is a type of the written law. He who has not risen through faith above the two laws cannot therefore receive the truth which is beyond nature and expression. On the contrary, he invariably crucifies the Logos, for he sees the Gospel either, like a Jew, as a stumbling-block or, like a Greek, as foolishness (cf. 1 Cor. 1:23).”   (The Philokalia, Loc. 14473-78)

“I am not speaking here about the mere act of listening to a passage of Scripture or to some other person; for this does not by itself involve purity of intellect or divine revelation. I am speaking about the person who possesses knowledge but distrusts himself until he finds another passage from Scripture or from one of the saints that confirms his spontaneous knowledge of the scriptural passage or of some sensible or intelligible reality. And if instead of one meaning he should find many as a result of giving attention to either the divine Scriptures or the holy fathers, he should not lose faith and think that there is a contradiction. For one text or object can signify many things. Take clothing, for example: one person may say that it warms, another that it adorns, and another that it protects; yet all three are correct, since clothing is useful alike for warmth, for adornment and for protection. All three have grasped the purpose assigned by God to clothing; and Holy Scripture and the very nature of-things themselves confirm it. But if someone whose intention is to rob and pilfer should say that clothing exists in order to be stolen, he would be an utter liar, for neither the Scriptures nor the nature of things suggest that it exists for this purpose; and even the laws punish those who do steal it. The same applies to everything, whether visible or invisible, and to every word of the divine Scriptures. For the saints neither know the whole of God’s purpose with regard to every object or scriptural text, nor on the other hand do they write down once and for all everything that they do know. This is because in the first place God is beyond comprehension, and His wisdom is not limited in such a way that an angel or man can grasp it in its entirety. As St John Chrysostom says with regard to a certain point of spiritual exegesis, we say about it as much as should be said at the moment, but God, in addition to what we say, knows other unfathomable meanings as well. And, in the second place, because of men’s incapacity and weakness it is not good for even the saints themselves to say all that they know; for they might speak at too great a length, thus making themselves offensive or unintelligible because of the confusion in their reader’s mind. As St Gregory the Theologian observes, what is said should be commensurate to the capacity of those to whom it is addressed. For this reason the same saint may say one thing about a certain matter today, and another tomorrow; and yet there is no contradiction, provided the hearer has knowledge and experience of the matter under discussion. Again, one saint may say one thing and another say something different about the same passage of the Holy Scriptures, since divine grace often gives varying interpretations suited to the particular person or moment in question. The only thing required is that everything said or done should be said or done in accordance with God’s intention, and that it should be attested by the words of Scripture. For should anyone preach anything contrary to God’s intention or contrary to the nature of things, then even if he is an angel St Paul’s words, ‘Let him be accursed’ (Gal. 1:8), will apply to him. This is what St Dionysios the Areopagite, St Antony and St Maximos the Confessor affirm.”   (THE PHILOKALIA, Kindle Loc. 31801-59)

How we read a text – what meaning we derive from it, is thus not merely found in scholarly research.  The meaning of the text appears to us to the degree we are faithful to Christ as Lord, have a pure heart, and have entered into Church, the Body of Christ.  The contemporary Orthodox theologian Andrew Louth summarizes this understanding of God’s Word this way:

“What does all this add up to? It suggests to my mind an attitude to Scripture that sees it not as some flat collection of infallible texts about religious matters, but rather as a body of witness of varying significance – some clearly crucial, as witnessing very directly to Christ, others less important (though never of no importance), as their witness to Christ is more oblique. And the criteria for importance are bound up in some way with the way the Church has taken them up into her experience. There is a hierarchy, a shape: the Gospel Book at the centre, the Apostle flanking it, and then a variety of texts from the Old Testament, generally accessed not through some volume called the Bible, but from extracts contained in the liturgical books, along with other texts: songs, passages from the Fathers and so on. The Scriptures then have a kind of shape, a shape that relates to our experience of them.   (Introducing Eastern Orthodox Theology, Kindle Loc. Loc. 395-401) 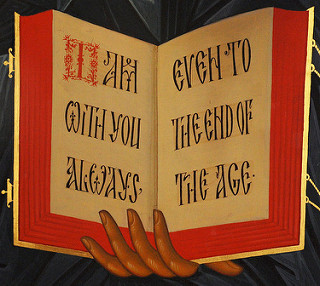 Next: The Old and The New Covenants