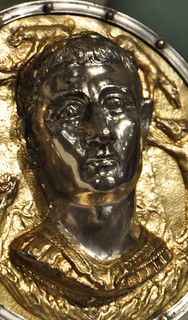 “In a world where mainstream religion was emphatically a branch of the state, emperors took the senior priestly roles. He became pontifex maximus (‘chief priest’ in Latin) and passed that role too his successors. Meanwhile, Augustus’s court poets and historians did a great job with their propaganda. They told the thousand-year old story of Rome as a long and winding narrative that had reached its great climax at last; the golden age had begun with the birth of the new child through whom peace and prosperity would spread to the whole world. The whole world is now being renewed, sang Virgil in a passage that some later Christians saw as a pagan prophecy of the Messiah.

(The fathers of the American Constitution borrowed a key phrase from this poem, novus ordo seclorum, ‘a new order of the ages’, not only for the Great Seal of the United States, but also for the dollar bill. They were thereby making the striking claim that history turned its vital corner not with Augustus Caesar, nor even with Jesus of Nazareth, but with the birth and Constitution of the United States.”(N.T. Wright, Simply Jesus, pp 29-30)