Then Herod, when he saw that he had been tricked by the wise men, was in a furious rage, and he sent and killed all the male children in Bethlehem and in all that region who were two years old or under, according to the time which he had ascertained from the wise men. Then was fulfilled what was spoken by the prophet Jeremiah: “A voice was heard in Ramah, wailing and loud lamentation, Rachel weeping for her children; she refused to be consoled, because they were no more.”  (Matthew 2:16-18)

As we continue the days of Christmas and our celebration of the Nativity of Christ in the Orthodox Church, we encounter the horrible story of King Herod slaying the innocent children because he feared among them might be a king who would take his throne from him.

We remember this in the Church because the Church remains realistic – the world is what it is.  The world is not paradise or heaven, yet God endeavors to break into the world as it is, to reunite us to Him, to reunite all of creation with our Creator.  In the Orthodox Church we encounter these hymns about the slaughter of the Innocent Children.

Today the evil king searches for the hidden treasure;

He kills the blameless innocents.

Rachel weeps for the beloved of her breast

And will not be comforted

May she behold them playing in the bosom of Abraham,

And be consoled in her lamentations.

The ultimate wish of the hymn is that Rachel will see all of these innocent Jewish children in Abraham’s bosom, numbered among the righteous of God.  The expression of this hymn, which reflects Orthodox theology and dogma, is important.  These children were all Jewish, unbaptized, never having believed in Christ, never having heard the Gospel, never having kept Torah or Orthodox Tradition.  Yet all are saved and given life in heaven.  God’s mercy and salvation extends to the innocent whomever they may be.

The lawless king searches for the King of the Ages

Who has entered time.

He is not able to discover or destroy Him,

And so harvests a multitude of blameless infants.

Innocents are made martyrs,

Citizens of the King on High,

Whose dominion shall be forever,

And the raging madness of Herod shall be destroyed. 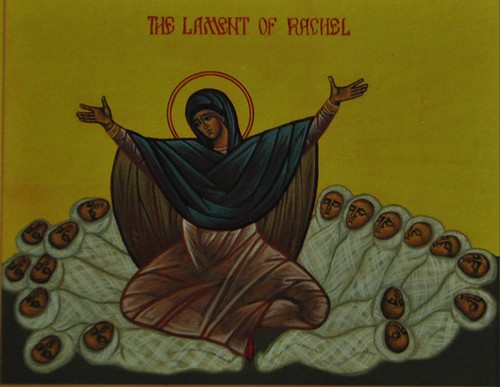 God is merciful even when humans are not.  God accepts the lives of innocents who die, and blesses them, granting them eternal life in heaven.  It is why we Orthodox invoke the memory of the Holy Innocents when we proclaim our pro-life position.  We believe all the victims of abortion are holy innocents, martyrs whom the Lord embraces even if the world did not.