In Luke 2:20-21, we learn of the circumcision of the baby Jesus.  The story confirms His humanity, which is essential since we in the Church say Jesus is our Lord, God and Savior!  It is God in the flesh who humbly submits to circumcision.  God became incarnate in order to humble Himself.  Luke reports the event, quite simply:

“At that time, the shepherds returned, glorifying and praising God for all they had heard and seen, as it had been told them.  And at the end of eight days, when he was circumcised, he was called Jesus, the name given by the angel before he was conceived in the womb.”

The circumcision of Jesus, would be unremarkable, and routinely Jewish, except for the claim that Jesus is God incarnate.  God does not ask His people to do anything that God is not willing to do Himself.  The Torah commanded circumcision for male children, even God in the flesh endures the ritual for our salvation.  God humbly submits Himself to being human.

“On the eighth day after His birth, the divine Child was taken to the Temple and duly circumcised according to the Jewish Law that had been observed from the time of Abraham. At this time He was given the name Jesus, the name announced to the most holy Virgin by the Archangel Gabriel (Luke 1:31). The Baptism of the New Covenant was prefigured in the Circumcision of the Old Covenant. The Lord’s Circumcision shows that He took true human flesh upon Himself, not its semblance as heretics later taught of Him. The Lord was truly circumcised, desiring thus to fulfill all the Law, which He Himself had given through our forefathers and the prophets. Fulfilling all the ordinances of the Law, He superseded them by Baptism in His Church, for, as the Apostledeclares: ‘In Christ Jesus neither circumcision avail any thing, nor uncircumcision, but a new creature’ (Gal. 6:15). (The Prologue from Ochrid, p 15) 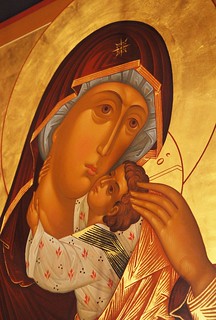