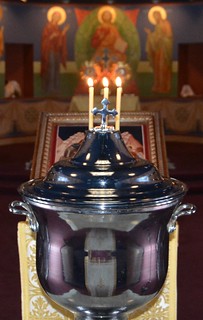 The prayers for the Great Blessing of water entreat God to make the blessing of the Jordan be present in the water in the church font.  In the Vespers service for Theophany, 13 Old Testament Readings are proclaimed.  Four of these reading make reference to the River Jordan:

Joshua 3:7-8, 15-17 (the ark causes the Jordan to stop flowing, so Israel can cross to the promised land on dry ground);

4[2] Kings 2:6-14 (Elisha parts the Jordan after receiving Elijah’s mantle when he ascended into heaven);

Genesis 32:1-10 (Jacob reminds God that he became a rich man after crossing the Jordan). 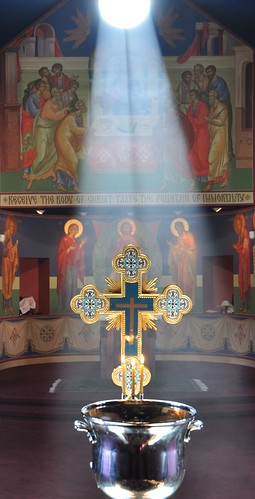 The Jordan River has a virtual mythical quality for Israel, and takes on a mystical purpose and meaning.  Crossing the Jordan is associated with the saving acts of God on earth – with movement that brings one closer to God and God’s Kingdom.   St. Gregory the Theologian reflects on the mystical meaning of the Jordan River.

“St. Gregory then comes back to the Jordan:

‘Alone among all rivers, the Jordan received the first-fruits of sanctification and blessing, and has shed the grace of baptism over the whole world, as from a source. And these things are signs of that regeneration which is effected by Baptism’.

This is a very striking definition of a type, that it is an act truly accomplished, and signifying some future action. St Gregory then alludes to the Jordan in its relation to Paradise:

‘The Jordan is glorified because it regenerates men and makes them fit for God’s Paradise’.”

(Jean Danielou, From Shadows to Reality,p 275) 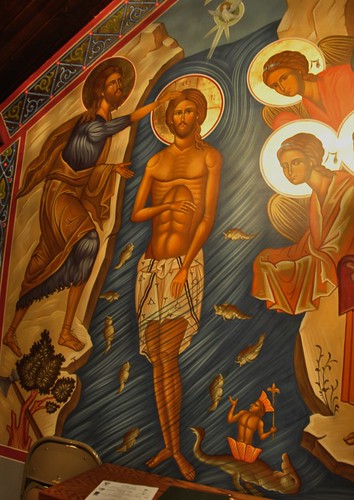 The Jordan is involved in several epiphanies of God, but in Christ’s baptism there is the Theophany of the Holy Trinity. It is Christ’s baptism that gives meaning and power to all baptisms done in Christ.  The Jordan has a mystical quality that is transferred to all who participate in it.