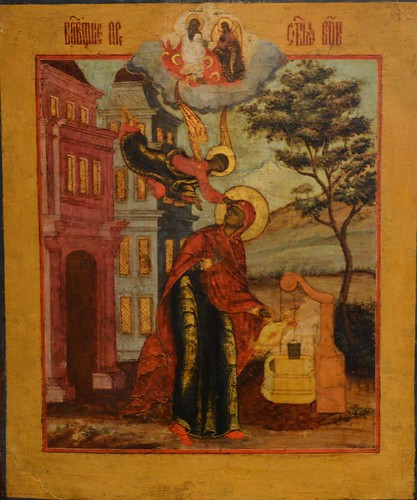 St Nikolai Velimirovic reminds us that Jesus was not adopted by God only when Jesus dies on the cross.  Jesus did not become God’s Son only at age 30 when He began His public ministry.  Jesus is God’s Son at the Annunciation to the Theotokos.  He was already beginning then His ministry of salvation.  St. Nikolai writes:

“Lastly, there is an important reason on the general, human level for the Lord Jesus’ going to Egypt, and not to some other country. He did not begin His earthly  mission only at the age of thirty, when He opened His divine lips and began to teach. He began His mission at his conception. At His conception by the Holy Spirit, He already had a follower. This was the holy Mother of God. Was not Joseph converted to Christ before His birth? Did not His birth open heaven to the shepherds and fill the astrologers from the East with truth, prayer, and immortality? Did not Herod, together with the hardened leaders and scribes of Jerusalem, fall away from Him and stand against Him while He still lay in the manger? As soon as He was conceived, He became the cornerstone of the palace of salvation, and a stumbling-block to others. As soon as He was conceived, the world around him began to be divided into sheep and goats. Above all, Mary and Joseph were for a short time divided in their view of Him. While Mary knew Him to be the fruit of the Holy Spirit, Joseph thought Him the fruit of sin. This division lasted only a short time. 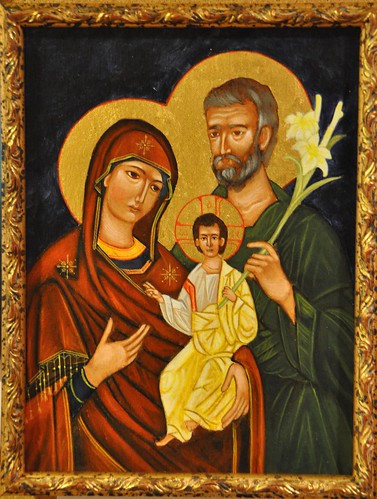 But the division made at His birth between, on the one hand, the shepherds and eastern astrologers, and Herod and the wise men of Jerusalem on the other, never came to an end. He came to sow, and at the same time to winnow. And He began his work from His conception in human flesh, right through to His death and glorious Resurrection, and from His Resurrection to this day, and from this day to the Last Judgement. He did not come into the world just to be a thinker. He lept into the drama of human life, as into the darkness of Egypt, to be light and leader, thinker and actor, sacrifice and victor. Indeed, He began His work in the world at that moment when His messenger, the great Archangel Gabriel, came down to Nazareth and announced His coming.”   (Homilies, pp. 53-54) 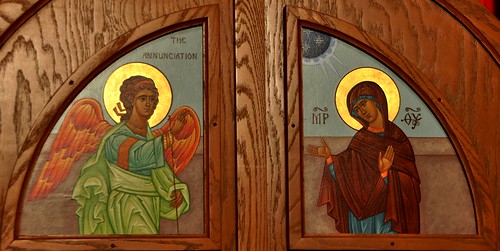 The Gospel Lesson of the Annunciation:

In the sixth month the angel Gabriel was sent from God to a city of Galilee named Nazareth, to a virgin betrothed to a man whose name was Joseph, of the house of David; and the virgin’s name was Mary. And he came to her and said, “Hail, O favored one, the Lord is with you!” But she was greatly troubled at the saying, and considered in her mind what sort of greeting this might be. And the angel said to her, “Do not be afraid, Mary, for you have found favor with God. And behold, you will conceive in your womb and bear a son, and you shall call his name Jesus. He will be great, and will be called the Son of the Most High; and the Lord God will give to him the throne of his father David, and he will reign over the house of Jacob for ever; and of his kingdom there will be no end.” 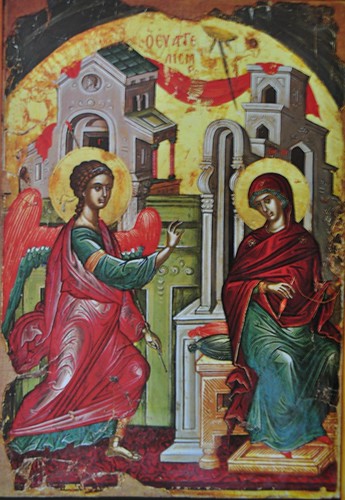 And Mary said to the angel, “How shall this be, since I have no husband?” And the angel said to her, “The Holy Spirit will come upon you, and the power of the Most High will overshadow you; therefore the child to be born will be called holy, the Son of God. And behold, your kinswoman Elizabeth in her old age has also conceived a son; and this is the sixth month with her who was called barren. For with God nothing will be impossible.” And Mary said, “Behold, I am the handmaid of the Lord; let it be to me according to your word.” And the angel departed from her. (Luke 1:26-38)