The Prodigal’s father watched for his son’s return and while the Prodigal was still a long way from home the father saw him and ran to meet him.  So too God is always watching for our repentance.  In Great Lent Christ calls us to confess our sins and return to God our Father. 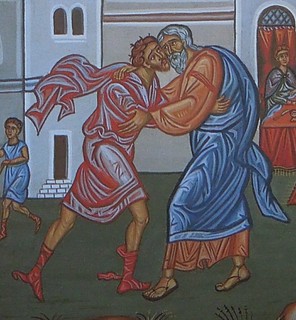 “It is a spiritual gift from God for a man to perceive his sins. When God sees that we suffer grievously in multifarious trials, this gift penetrates into our thought, lest we should depart from life in the midst of all these calamities and afflictions, having reaped no profit from this world. Our lack of understanding is not due to the difficulty of temptations, but to our ignorance. Often it happens that while some are in the midst of these trials, they depart from the world laden with guilt, since they did not confess, but rather denied and blamed. But the merciful God waited with the hope that somehow they might be humbled, so that He might forgive them and make for them a way of escape. And He would not only have provided them with a way of escape from their temptations, but would have forgiven them their transgressions by reason of the brief confession of their hearts.” (St. Isaac the Syrian, The Ascetical Homilies of St. Isaac the Syrian: Homily 74, pp. 262-263).