The services of Holy Week evolved through the many centuries of the Church’s existence. In keeping Holy Week we are joining our Christian forefathers and mothers from as far back as the Third Century in honoring Jesus as Lord. 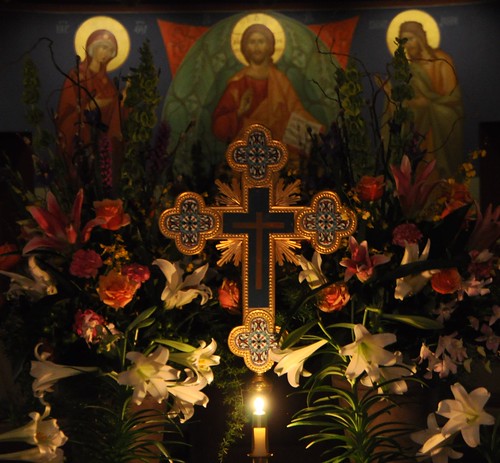 “A fast of six days before Easter was common by the mid-third century, and towards the end of the fourth century Great Week or Holy Week was beginning to be established in Jerusalem under the influence of its bishop, St. Cyril (Bishop of Jerusalem c. 348/50-386/7).

Under the inspiration of the Emperor Constantine and his mother St. Helen the area known as Golgotha or Calvary was greatly modified to allow the sites of the crucifixion and the burial to be integrated into one complex of buildings capable of accommodating large numbers of pilgrims. Here by the late fourth century the Good Friday liturgy included lengthy readings from the Gospel accounts of Christ’s Passion and death, and the veneration of the Cross of Christ, which had been discovered by St. Helen; the burial of Christ was then commemorated in the church of the Anastasis (Resurrection).

The pattern of Holy Week ceremonies that developed in Jerusalem gradually influence observances elsewhere in the Byzantine Empire and by the ninth century the more dramatic Jerusalem ceremonies replaced other rites in Constantinople. Also in the capital there was a great devotion to the Sacred Lance which had pierced the side of Christ; huge crowds were attracted to Hagia Sophia to venerate the lance and other relics of the Passion but by 1200 this popular devotion had declined, and no longer took place in Hagia Sophia.

Another significant development in Constantinople was the growth of intense devotion to the Passion of Christ in some of the smaller monasteries during the twelfth century. At this time there was an increasing interest in human psychology and emotion, and this led to reflection on the relationship between the Theotokos and Christ during the last stages of his earthly life. Much poetry was written on the subject, and some has found a place in the liturgical texts for Good Friday and Holy Saturday. This in turn had its influence on icon painting.”   (John Baggley, Festival Icons for the Christian Year, p. 102).

How services have been done for Holy Week have changed and evolved through the centuries.  We are not simply trying to imitate the past in keeping Holy Week, we are entering into Christ’s own life, death and resurrection. We do this also in baptism where we die with Christ and are resurrected with Him. Holy Week is another way we experience and reflect on our own baptism each year.  Below is one hymn from Holy Monday in which we see clearly how we are moving between considering the historic events of Christ’s crucifixion and how we live that crucifixion in our own lives today.

As the Lord was going to His voluntary passion, He said to the Apostles on the way: ‘Behold, we go up to Jerusalem, and the Son of Man shall be delivered up, as it is written of Him.’

Come, therefore, let us also go with Him, purified in mind.  Let us be crucified with Him and die through Him to the pleasures of this life.  Then we shall live with Him and hear Him say: ‘I go no more to the earthly Jerusalem to suffer, but to my Father and your Father, to my God and your God.  I shall raise you up to the Jerusalem on high in the Kingdom of Heaven.”

The hymns often call us spiritually t0 live the events of the life of Christ in our own lives.  What happened liturgically over time is that the services got changed into re-enacting the life of Christ, rather than calling us to enact Christ’s life in our own lives.  As St. Paul put it, “I have been crucified with Christ; it is no longer I who live, but Christ who lives in me; and the life I now live in the flesh I live by faith in the Son of God, who loved me and gave himself for me” (Galatians 2:20). 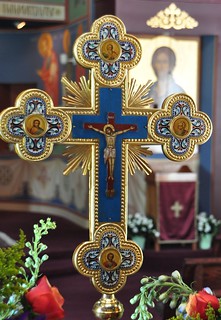 Some of the currently most popular Holy Week rituals are not the oldest practices, and many are relatively new in Orthodox history.  The Holy Week services are at heart simply the daily liturgical services (Vespers – evening worship and Matins – morning worship) modified with additions for the days of Holy Week.  But their original place and purpose in Holy Week has now been altered so that commonly  Matins (morning worship) is served in the evening and Vespers (sunset worship) is served in the morning.  The services of Holy Friday and Saturday have become increasingly dramatizations of the last days of Christ’s life.  Liturgy is always living and changes to meet the needs of the Church and its members.