Then, the same day at evening, being the first day of the week, when the doors were shut where the disciples were assembled, for fear of the Jews, Jesus came and stood in the midst, and said to them, “Peace be with you.” When He had said this, He showed them His hands and His side. Then the disciples were glad when they saw the Lord. So Jesus said to them again, “Peace to you! As the Father has sent Me, I also send you.” And when He had said this, He breathed on them, and said to them, “Receive the Holy Spirit. If you forgive the sins of any, they are forgiven them; if you retain the sins of any, they are retained.” 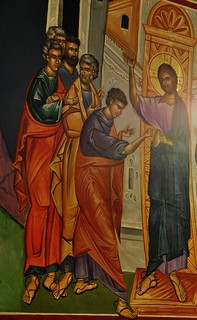 Now Thomas, called the Twin, one of the twelve, was not with them when Jesus came. The other disciples therefore said to him, “We have seen the Lord.” So he said to them, “Unless I see in His hands the print of the nails, and put my finger into the print of the nails, and put my hand into His side, I will not believe.” And after eight days His disciples were again inside, and Thomas with them. Jesus came, the doors being shut, and stood in the midst, and said, “Peace to you!” Then He said to Thomas, “Reach your finger here, and look at My hands; and reach your hand here, and put it into My side. Do not be unbelieving, but believing.” And Thomas answered and said to Him, “My Lord and my God!” Jesus said to him, “Thomas, because you have seen Me, you have believed. Blessed are those who have not seen and yet have believed.” And truly Jesus did many other signs in the presence of His disciples, which are not written in this book; but these are written that you may believe that Jesus is the Christ, the Son of God, and that believing you may have life in His name.

One modern church historian comments on the confession which the Apostle Thomas utters upon seeing the Risen Jesus:  “My Lord and my God!”

“How could a faithful Jew who had recited the Sh’ma since childhood, whose prayers were addressed to God the king of the universe, address Christ as God or Son of God, as the earliest Christians did? Hilary’s answer is that the Resurrection of Christ transfigured everything. When Jesus came and stood among the disciples and put his finger in his side, Thomas said, “My Lord and my God!” When confronted by the risen Christ one does not say, “How interesting,” but “My Lord and my God!” 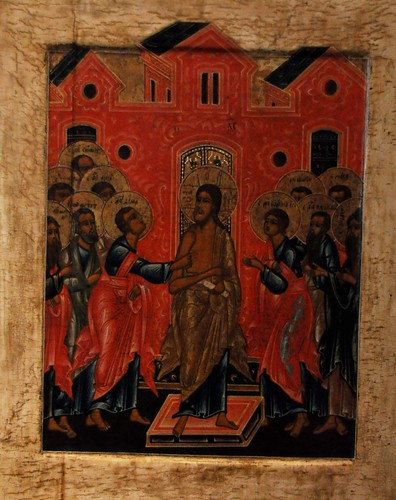 The terms used by Thomas, Lord and God, are significant, and they allow Hilary [d. 367AD] to Drive home his point. “Lord” and “God” are the terms that occur in the Sh’ma, yet here they are used not of God the creator of the world and the king of the universe, but of Christ. Because of the Resurrection Thomas recognized that the one he knew, who had lived among them, was not just an extraordinary human being but the living God. “No one except God is able to rise from death to life by its own power,” writes Hilary. But his argument runs deeper. He wishes to say not only that the Resurrection revealed something about Christ to His disciples, namely, that he is God; his more penetrating observation is that Resurrection caused them to think about God differently. Once Jesus was raised, writes Hilary, Thomas “understood the whole mystery of the faith,” for “now,” that is, in light of the Resurrection, Thomas was able to confess Christ as God “without abandoning his devotion to the one God.” After the Resurrection he could continue to recite the Sh’ma because he had begun to conceive of the oneness of God differently. Thomas’s confession “my Lord and my God” was not the “acknowledgement of a second God, nor a betrayal of the unity of the divine nature”: it was a recognition that God was not a “solitary God” or a “lonely God.” God is one, says Hilary, but not alone.”. (Robert Louis Wilken, The Spirit of Early Christian Thought, pp. 91-92)