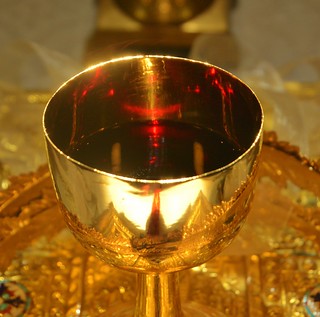 The Holy Eucharist is given by the Lord “in remembrance of me” (1 Cor. 11:25). First of all, in sensu realissimo, the Eucharist is the power of the Incarnation, the realized and abiding Divine-humanity, including all the faithful: “we being many are one bread, and one body: for we are all partakers of that one bread” (10:17). The Divine Eucharist is the abiding of Christ in the world, His connection with the world, despite the ascension: “I am with you always, even unto the end of the world” (Matt. 28:20) by the Holy Spirit, sent by Him into the world from the Father: “and I will pray the Father, and he shall give you another Comforter, that he may abide with you forever…I will not leave you comfortless: I will come to you” (John 14:16, 18). 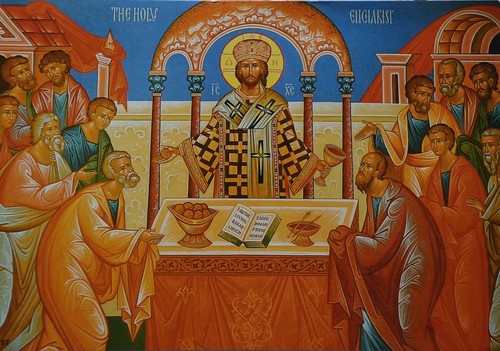 Communion with the body and blood is therefore not yet all that the Eucharist signifies as the divine “It is finished” (John 19:30), as the sacrificial and abiding Incarnation. It is the sacrament of sacraments, the foundation of all the sacraments, and its accomplishing power is the Pentecost, the coming into the world of the Holy Spirit, who “shall teach you all things, and bring all things to your remembrance, whatsoever I have said unto you“ (14:26). “In remembrance of me [anamnesin]” and “to bring…to your remembrance [hypomnesei]” are closely connected, which is expressed in the fact that the “breaking of the bread” appears in the life of the Church only after the Pentecost, as the accomplishment of Divine humanity.

Thus, originally, in the apostolic age, the Divine Eucharist as the basis of all the sacraments was exclusively that which it is as the realization of the body of the Church as the body of Christ. Its essential character was not hierarchical but koinonic. That is, its character was one of sobornost, but this character was replaced as early as the second century by hierarchism, which, of course, did not completely eliminate it, but was capable of obscuring it. How this happened has to be explained by church history.” (Sergius Bulgakov, The Bride of the Lamb, pp. 286-287).