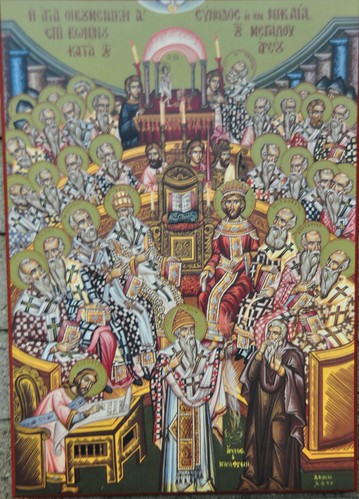 There is another factor that occurs as a result of this: the Church in many ways so identifies itself with the Byzantine Empire as to make the Empire and the Church coterminous.   Whatever the Byzantine Emperor and State ruled became law in the Church and vice versa.  The Ecumenical Councils, called as they were by the Emperors, are as much state affairs as they are church affairs.  The Byzantines saw this as a symphony between Church and State.  Fr. Eugen J. Pentiuc notes:

“A climax came in 545 during the prolonged conflict over the validity of the Council of Chalcedon (451). In that year Justinian declared that the dogmata of the first four councils carried an authority equal to that of the holy Scriptures.

Novella 131 issued by emperor Justinian in the year 545 C.E. reads:

‘Therefore We order that the sacred, ecclesiastical rules which were adopted and confirmed by the four Holy Councils, that is to say, that of the three hundred and eighteen bishops held at Nicea, that of the one hundred and fifty bishops held at Constantinople, the first one of Ephesus, where Nestorius was condemned, and the one at Chalcedon, where Eutyches and Nestorius were anathematized, shall be considered as laws. We accept the dogmas of these four Councils as sacred writings, and observe their rules as legally effective.'” (The Old Testament in Eastern Orthodox Tradition, pp. 151-152) 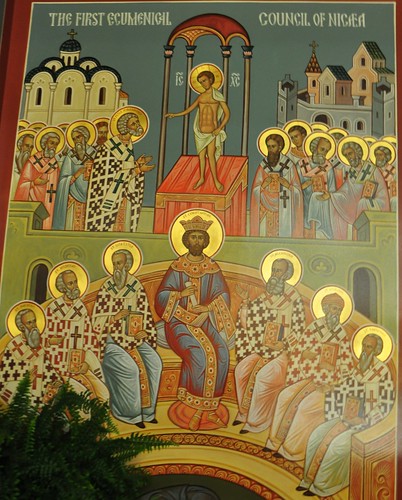 There is a plus and minus in this symphony.  On the one hand, there was cooperation unifying Byzantine society civilly and spiritually.  Justinian is recognized in the Church as both Emperor and saint.  On the other hand, it appears that there is also a belief that the Holy Spirit acted equally in the state as in the Church as there is little difference seen between the two.  The Canons which reflect the work of the Holy Spirit in the ongoing life of the Church in the world, became civil law.  The ability of the Church to discern the movement of the Holy Spirit became enmeshed with the life of the Empire.  This is an enmeshment from which the Church has never fully disentangled itself – and doesn’t seem to have the desire to do so.  The Byzantine Empire came to an end as God ordained, and the Church survived, and yet the laws, assumptions and worldview of the Empire remain embedded in and/or imposed on the Church.  History moved on, leaving the Byzantium behind.  The Church needs to continue to discern the movement of the Holy Spirit and recognize the temporal nature of canon law – “law” which emerged because of particular historical needs but which became fixed, eternal and even ossified, even when history kept changing the conditions in which the Church finds itself.  Canon Law was not intended to freeze the Church in a historical period or to identify the universal Church with a particular worldly empire.  Canon Law emerged as the Church’s living response to contemporary issues and circumstances.  It is considered to be part of how the Church adapts to and responds to the times.  In a sense it is the “open” canon of the Church, subject to the Church’s own discerning and formulating the proper response to new and unfolding changes in history and the world.  Without that ability to formulate a current response to a contemporary issue, the Church becomes petrified, ossified and moribund – frozen in time despite the ongoing and changing nature of history and the world.

Commemorating the Ecumenical Councils is an essential good in the life of the Church – it makes us recognize that the Church throughout its history faced the challenges of its time and place.  Today, we commemorate the Fathers of the 1st Ecumenical Council who not only showed us the right response to the crises of their day but also how a living Church responds to issues internal and external to the Church in each and every age.   The Church in the past met those challenges by forming new “law” and methods to deal with the changing reality of history.  We need that same Spirit today.