“In her virginity, Eve put on

leaves of shame, but your mother has put on,

in her virginity, a garment of glory

that encompasses all, while to Him who covers all

she gave a body as a tiny garment.”

The imagery of the Robe of Glory, deeply embedded in the Syriac tradition, is used to describe the various stages of salvation history: Adam and Eve are originally clothed in it in Paradise, but lose it at the Fall; Christ, the Divine Word who “put on the body,” deposits humanity’s lost Robe of Glory in the River Jordan at his baptism, and at each Christian baptism it is received in potential from the Font (often described both as the Jordan and as a womb; …); finally, at the Last Judgement, it becomes the clothing of the Righteous in reality …. 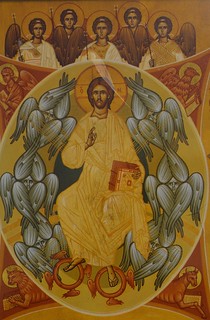 Since Christ’s presence in the Jordan makes the Robe of Glory available again to humanity, his presence in Mary’s womb is understood as constituting her baptism, thus providing her with her Robe of Glory …. Mary’s giving Christ “a body as a tiny garment” and receiving in return a “Robe of Glory” is one of the ways in which Ephrem brings out the idea of exchanged involved in the incarnation; this is expressed in … epigrammatic form: “He gave us divinity, we gave Him humanity” (Sebastian P. Brock & George A. Kiraz, Ephrem the Syrian: Select Poems, p. 51).