“Everyday experience shows that even people who in their inner depths accept Christ’s commandment to love one’s enemies do not put it into practice. Why? First of all, because without grace we cannot love our enemies. But if, realizing that this love was naturally beyond them, they asked God to help them with His grace they would certainly receive this gift.

Unfortunately, it is the opposite that prevails. Not only unbelievers but people who call themselves Christians are afraid of acting toward their enemies according to Christ’s commandment. They think that to do so would only be of advantage to the other side, seeing the enemy refracted through the distorting prism of hatred as having nothing good in him, that he would take advantage of their ‘indulgence’ and respond to their love either by crucifying or shamelessly crushing and subjugating them, thus letting evil, as generally personified by this enemy, triumph. 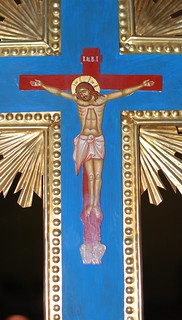 The idea that Christianity is ‘wishy-washy’ is profoundly mistaken. The saints possess a force powerful enough to sway people, influence the masses, but theirs is the reverse method – they make themselves servants of their brethren, and thus win for themselves a love in its essence imperishable. By following this course they gain a victory that will obtain ‘world without end’, whereas a victory won through violence never lasts and by its nature is more to the shame than to the glory of mankind.”