“In the time of the Emperor Antoninus (138-161), St Abercius was bishop in the city of Hierapolis in Phrygia. The great majority of the town’s inhabitants were pagans, and St Abercius governed his little flock with a heart greatly saddened by the great number of pagans and idolaters, and with fervent prayer to God that He would bring them to the true Light. At the time of a rowdy idolatrous festival, Abercius became inflamed with godly zeal and went into the temple, smashing all the idols. When the furious pagans tried to kill him, three young madmen fell down before the man of God, foaming at the mouth and bellowing. The man of God drove the demons out of them, and they were healed and became calm. Seeing this, the fury of the pagans turned to marveling at Christ’s wonderworker, and five hundred of them were immediately baptized. Little by little, everyone in the city of Hierapolis came to believe in Christ and was baptized. The proconsul of the region, Publius, had a blind mother whose sight Abercius restored by prayer, and both Publius and his mother came to faith 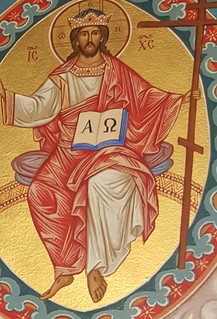 in Christ, along with many other people. In old age, Abercius was summoned to Rome, where he healed the Emperor’s mad daughter. The Lord Christ appeared to His faithful follower several times. People from far and near came to him for help in chronic sickness, and the demons not only feared him but were obedient to his commands. At the order of the Lord Himself, he preached the Gospel throughout Syria and Mesopotamia, and went to his beloved Lord in great old age, in the city of Hierapolis at the end of the second century.”  (The Prologue from Ochrid, p. 96)