St. Phoebe the Deaconess
Reports earlier this year on the Internet stated that the Orthodox Patriarch of Alexandria ordained some women deacons.   There have been conflicting stories as to what exactly the Patriarch did and whether or not these women were ordained as deacons following an ancient rite or whether the Patriarch had in fact created a new office in the church.  Recently, a number of American and Greek Orthodox liturgical theology professors offered opinion supporting the Patriarch of Alexandria in his decision to ordain women deacons in Africa:   https://publicorthodoxy.org/2017/11/17/support-alexandria-deaconess/ .

While whatever one Patriarchate does always has some implication for all Orthodox, so far no other Patriarch has claimed that they will follow suit and also ordain women deacons.  Although the action of the Alexandrian Patriarch seems controversial to some, he did not do anything forbidden by the Orthodox canons and as the liturgical theology professors note in their letter he is only restoring something that used to exist in Orthodoxy.   Orthodox Patriarchs are not known for being innovative nor for acting unilaterally on such issues.  So one would think he probably sounded out this idea with at least some other Orthodox bishops before doing it.  When it comes to liturgical practices, the Patriarchs are conservative and tend to preserve the current received tradition and rarely try to revive something that disappeared in the past.    The Patriarch’s decision to ordain the deaconesses is reminiscent of how the office of deacon came into existence at the time of the apostles.  There was a need and the Church creatively met the need by creating a new office:

Now in these days when the disciples were increasing in number, the Hellenists murmured against the Hebrews because their widows were neglected in the daily distribution. And the twelve summoned the body of the disciples and said, “It is not right that we should give up preaching the word of God to serve tables. Therefore, brethren, pick out from among you seven men of good repute, full of the Spirit and of wisdom, whom we may appoint to this duty. But we will devote ourselves to prayer and to the ministry of the word.” And what they said pleased the whole multitude, and they chose Stephen, a man full of faith and of the Holy Spirit, and Philip, and Prochorus, and Nicanor, and Timon, and Parmenas, and Nicolaus, a proselyte of Antioch. These they set before the apostles, and they prayed and laid their hands upon them. And the word of God increased; and the number of the disciples multiplied greatly in Jerusalem, and a great many of the priests were obedient to the faith.  (Acts 6:1-7)

The Church created a new office to meet its current need.   It needs to be noted that it is the ordination of deacons that leads to the first martyrdom in the Church.   St. Stephen one of the first deacons is the proto-martyr of the Church.  Creating a new ministry in the Church created a new category of saint, the martyr.  Orthodoxy claims the Church is founded on the blood of the martyrs.  It was not the apostles who were martyred first, but a deacon.  The Church was glorified by creating the new ministry in the Church.
Time will show us whether this action is being guided by the Holy Spirit and will bring benefit to the Orthodox Church throughout the world and will bear glorious spiritual fruit for the Church.   The restoration of the women diaconate has been discussed on and off in Orthodox for the last 100 years.  The Russian Church was discussing the issue in 1917 before the communist revolution took control of Russia and forced the Church to stop talking about issues that would make the Church more engaging in society.  The Greek Church had a few women deacons at the beginning of the 20th Century ordained by St. Nektarios.   More recently the discussion has been taken up by  the St. Phoebe Center for the Deaconess.    I think such discussion is healthy for the Church.  This is a discussion about restoring an office that once was part of the Orthodox Church.  It is not about creating something that never existed in the Church.  This is not following societal trends, but rather making the Church, the Body of Christ whole.  St. Paul said if one member of the Body suffers, we all suffer.  If we the Church have lost a vital ministry, we all are suffering that loss, and healing the Body and restoring the ministry would be a good thing.  St. Paul writes:

On the contrary, the parts of the body which seem to be weaker are indispensable, and those parts of the body which we think less honorable we invest with the greater honor, and our unpresentable parts are treated with greater modesty, which our more presentable parts do not require. But God has so composed the body, giving the greater honor to the inferior part, that there may be no discord in the body, but that the members may have the same care for one another. If one member suffers, all suffer together; if one member is honored, all rejoice together.
Now you are the body of Christ and individually members of it. And God has appointed in the church first apostles, second prophets, third teachers, then workers of miracles, then healers, helpers, administrators, speakers in various kinds of tongues. Are all apostles? Are all prophets? Are all teachers? Do all work miracles? Do all possess gifts of healing? Do all speak with tongues? Do all interpret? But earnestly desire the higher gifts. And I will show you a still more excellent way.   (1 Corinthians 12:22-31) 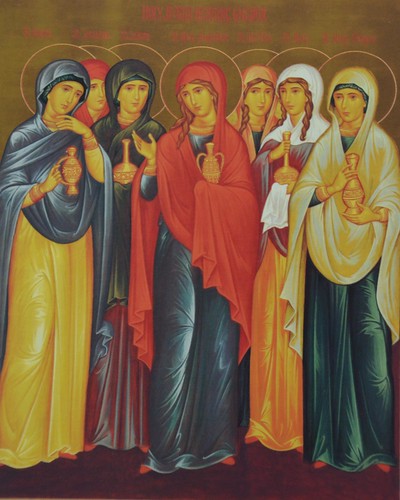 We all need to pray for the Church that God will provide for us the ministries that we need to witness to the world today.  God has appointed us to carry the Gospel to the world, and we need all the members of the Body to be working and working together.

Then Jesus said to his disciples, “The harvest is plentiful, but the laborers are few; pray therefore the Lord of the harvest to send out laborers into his harvest.”  (Matthew 9:37-38)