Yesterday I died with Him; today I am made alive with Him.

Yesterday I was buried with Him; today I am raised up with Him.

Let us offer to Him Who suffered and rose again for us … ourselves, the possession most precious to God and most proper. Let us become like Christ, since Christ became like us.

Let us become Divine for His sake, since for us He became Man.

He assumed the worse that He might give us the better.

He became poor that by His poverty we might become rich.

He accepted the form of a servant that we might win back our freedom.

He came down that we might be lifted up.

He was tempted that through Him we might conquer.

He ascended that He might draw to Himself us, who were thrown down through the fall of sin.

Let us give all, offer all, to Him who gave Himself a Ransom and Reconciliation for us. 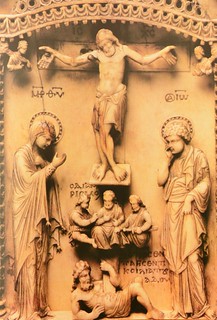 We needed an incarnate God, a God put to death, that we might live.

We were put to death together with Him that we might be cleansed.

We rose again with Him because we were put to death with Him.

We were glorified with Him because we rose again with Him.

A few drops of Blood recreate the whole of creation!