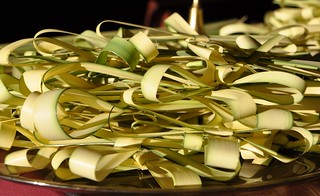 In the writings of the desert fathers, there is an interesting interplay that occurs regarding a literal understanding of instructions and a literal understanding of the scriptures.  The Scriptures reveal Christ and so often are not understood literally or historically but rather are read as signs or prophecies or prototypes of Christ.  The Scriptures are to help us remain faithfully united to Christ – and thus their historical or literal truthfulness is not the really important issue.   The issue is how they reveal Christ to us and help us follow Christ.  In the early Church it is often the heretics who hold to a completely literal interpretation of every text and who fail to understand the true scope of the Scriptures.  On the other hand, one sees a literalism that is related to obedience in which the disciple tries to fulfill the wish of the teacher to the letter of the law.  So we read: 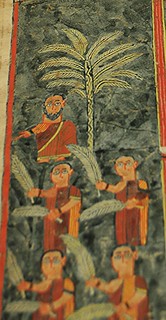 On another occasion the blessed Arsenius said to Abba Alexander: “Come and eat with me when you have cut your palm-fronds, but if some guests come, eat with them.” So Abba Alexander worked away evenly and moderately; when the time came, he still had palm-fronds. Wishing to fulfill the elder’s instruction, he stayed to complete the palms. When Abba Arsenius saw that he was late, he ate, thinking that [Abba Alexander] had guests, but Abba Alexander went [to him] when he had finished the palm-fronds in the evening and the elder said to him: “You had guests?” and he said: “No.” “So why did you come?” [the elder] said to him. “Because you said to me: ‘When you have cut your palm-fronds, come then,’” he said, “and, observing your instruction, I did not come because I only completed [the task] just now.” The elder was amazed at his scrupulosity and he said to him: “Break your fast earlier so you can perform your synaxis and partake of your water, otherwise your body will soon sicken.” (Give Me a Word: Alphabetical Sayings of the Desert Fathers, pp. 44-45)

Many in the early church read the sin of Eve and Adam as being one of prideful disobedience.  The corrective as they saw it was for Christians to be disciples – to follow the discipline of their teachers and not follow their own self-willfulness.  Thus we find in the desert fathers many stories of monks diligently and scrupulously obeying their elder’s instructions, even to the point of absurdity.  Of course, the point is not to do the absurd, but to emphasize the need to be a disciplined follower of Christ.