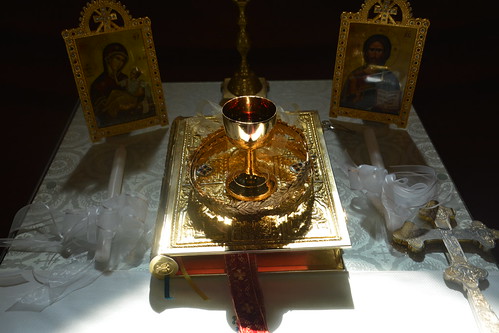 Before the final blessing of the marriage, the priest prays that God will “take up their crowns.” This image is an encouragement for married couples to live in holiness and follow the ways of the martyrs and married saints to salvation. Salvation is a gift that is tried by many obstacles and temptations; yet, it is expressed as joyful life in the presence of God in his kingdom. This joy is not as fleeting or simple as temporary “happiness.” Rather, it contains within itself the fruits of labor and assists in the development of the unquenchable desire to serve the other in accordance with one’s natural inclination as a communal being.

Then secondly, the glory and the honor is that of the martyr’s crown. For the way to the kingdom is the martyria–bearing witness to Christ. And this means crucifixion and suffering. A marriage which does not constantly crucify its own selfishness and self-sufficiency, which does not “die to itself” that it may point beyond itself, is not a Christian marriage. The real sin of marriage today is not adultery or lack of “adjustment” or “mental cruelty.” It is the idolization of the family itself, the refusal to understand marriage as directed toward the Kingdom of God. (Schmemann, For the Life of the World) 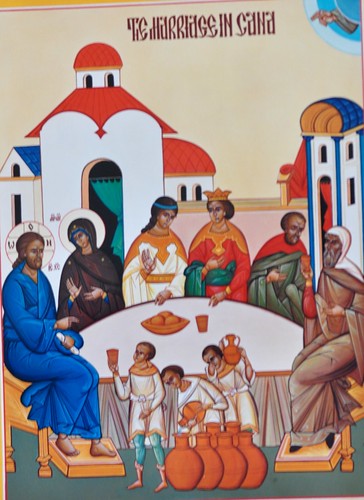 Crowns become the reward for and sign of carrying the cross. Before marriage a specific cross is given to the individual, but now a new cross is given to the two united as one. This new cross requires cohesive work with the other in a way that is unique to the individual and is bearable only in services to Christ, through the spouse, by the Holy Spirit and in concordance with the Father. In this sacrificial love, martyrdom is made manifest. Again, in the words of Fr. Schmemann,

In a Christian marriage, in fact, three are married; and the united loyalty of the two toward the third, who is God, keeps the two in an active unity with each other as well as with God. Yet it is the presence of God which is the death of the marriage as something only “natural.” It is the cross of Christ that brings the self-sufficiency of nature to its end. But “by the cross joy [and not ‘happiness’!] entered the whole world.” Its presence is thus the real joy of marriage. It is the joyful certitude that the marriage vow, in the perspective of the eternal Kingdom, is not taken “until death parts,” but until death unites us completely.