For though we live in the world we are not carrying on a worldly war, for the weapons of our warfare are not worldly but have divine power to destroy strongholds.  (2 Corinthians 10:3-4) 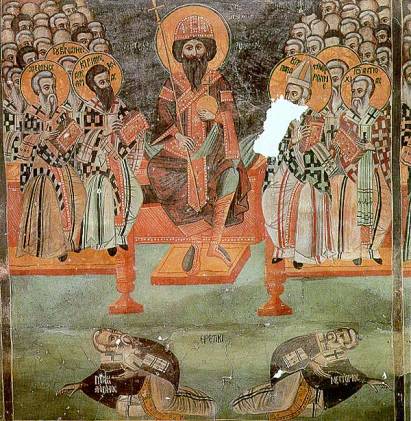 In 431AD, Emperor Theodosius II the Younger, issued an edict regarding imperial dignity, rights and security which acknowledged that being Christian also meant belonging to a kingdom not of this world.   It was normative for the Emperor to be protected by armed guards which also was a show of imperial power.  Even as the Byzantines thought that their Empire could accomplish God’s will “on earth as it is in heaven“, they accepted that life on earth still required the use of he sword at times.  They were not Utopian or Pollyanna-ish in their view of a Christian empire.  However, Theodosius decreed at the Ecumenical Council in Ephesus that when entering a church, all weapons were to be left outside the church.  Not only weapons, but even his crown, another sign of imperial power, was not to be brought into the church.  Before God we stand stripped of outward signs of imperial power or weaponry, acknowledging our own submission to the will of God. 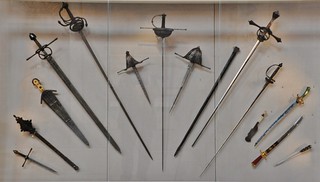 Although we are always surrounded by the lawful imperial weaponry, and it is not fitting for us to be without weapon-bearers and guards; when, however, entering the churches of God, we shall leave our weapons outside and take off the very diadem, emblem of our imperial dignity. (at the Ecumenical Council of Ephesus, 431. From For the Peace from Above, p 111)

For Emperor Theodosius, even the “good guys” were not to bring weapons into the church.  We all stand before God as sinners without defense and in need of God’s mercy.

And take the helmet of salvation, and the sword of the Spirit, which is the word of God.  (Ephesians 6:17)