By the inexpressible providence of God some people have obtained divine rewards for their labors before doing them; others during their toil; others after; and some only at the time of their departure.   (St John Climacus, The Ladder of Divine Ascent, Kindle Location 2394-2395)

The above quote from St. John Climacus reminded me of an event that happened almost 50 years ago.  A friend of our family had an aging mother who was about 85.  She was having serious trouble walking, suffering a lot of pain in her legs.  Perhaps it was a circulatory problem, but I don’t remember that detail.   She kept telling her son, our family friend, that if she couldn’t walk anymore, she hoped God would take her.  She didn’t want to keep living if she couldn’t go to church and she was afraid that since she couldn’t walk they would put her in a nursing home and that would be the end of her church attendance. She had been several times doctors but they hadn’t so far found a solution to the problem.  Then, one day, the doctor called the man and told him they had a new medication for his mother which the doctor felt would help her be able to walk.  Our friend went to the pharmacy and picked up the prescription and drove it to his mother’s house.  To his surprise, she was not home.   She didn’t drive, so he couldn’t imagine where she went.  He searched the house and began looking around the neighborhood.  A neighbor told him that he had seen his mom walking away from the home earlier in the day.  He became very alarmed knowing she wasn’t able to walk very well.  He drove around the neighborhood but didn’t see her.  He felt somewhat panicked about what might have happened to her.  He called the doctor and the hospital, but could not locate her.  After a considerable time, he drove to the church because it was the one place he knew she liked to be.  And sure enough there was his mom sitting on the front steps of the church.   She had walked nearly 2 miles to get there.  When he got out of the car, he felt a bit angry and said to his mother, “What are you doing here?”   She calmly replied that she had come to church to pray to God to ask him to help her so she could walk and come to church, but if that God wasn’t going to help her, then she hoped He would allow her to die in peace.

The son told her that the doctor had called that very morning with a new prescription for her and he had gotten the medication for her.  She replied, “See, God answered my prayer.”    He said later he felt a little amused by her simple faith, imagining as she did that God had answered her prayer, when he knew that in fact that medication was in production for years before she ever made that prayer.   His problem of course was his good Western mind with its linear view of history – as if God needed to wait for a prayer to be offered before God could  begin to act upon the petition.  Or as St. John Climacus noted in the quote above, some obtain their divine rewards before doing the labor. 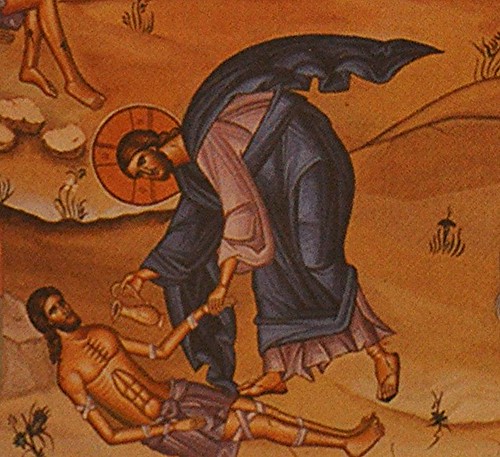