Most Orthodox calendars list daily Scripture readings in which we have perhaps a Gospel lesson for the day.  And while we certainly benefit from the daily reading of Scriptures and from considering a short Gospel lesson, we can also gain additional insight by reading any one Gospel lesson in its context – considering how it fits in to the other lessons before and after it.  So, for example if we take the Gospel lesson of Matthew 9:1-8 (Christ forgiving a paralytic his sins and then healing the paralytic) which we read on a summer Sunday and look at that lesson in the larger context of Matthew’s Gospel we may note other details.  Consider  Matthew 8:14-9:13 as a larger context for the miracle of healing the paralytic:

And when Jesus entered Peter’s house, he saw his mother-in-law lying sick with a fever; he touched her hand, and the fever left her, and she rose and served him. That evening they brought to him many who were possessed with demons; and he cast out the spirits with a word, and healed all who were sick. This was to fulfil what was spoken by the prophet Isaiah, “He took our infirmities and bore our diseases.” 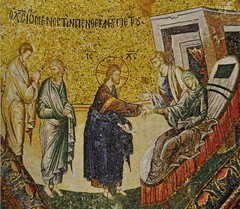 Jesus heals not only Peter’s mother-in-law, but also all those who were ill or demon possessed.  There is no sense in this event that Jesus made discipleship a pre-condition for being healed, nor do we even see Him requiring people to make some ascetical effort to obey God, or even a demand that they repent before He will heal them.  The story is one of God’s grace towards sinners and the sick, not about people attempting to be righteous or being rewarded for their efforts.   Christ does not seem in this case to determine if they are worthy of the miracle nor if they have a proper faith or even if they practice any faith.   Jesus heals all who are brought to Him.

Now when Jesus saw great crowds around him, he gave orders to go over to the other side. And a scribe came up and said to him, “Teacher, I will follow you wherever you go.” And Jesus said to him, “Foxes have holes, and birds of the air have nests; but the Son of man has nowhere to lay his head.” Another of the disciples said to him, “Lord, let me first go and bury my father.” But Jesus said to him, “Follow me, and leave the dead to bury their own dead.”

Jesus, unlike modern televangelists or healers, is not trying to attract attention and a crowd.  When Jesus sees the crowd gathering, he says it is time to move on.  He is not there to set the stage for a bigger ministry nor to collect accolades or donations. He completely misses the PR opportunity.  He receives no glory from adoring followers.

What Christ does is give freely God’s abundant mercy and then He moves on.  If people want to become part of His successful ministry, they themselves have to give up everything to follow Him.  No wonder Jesus appeared in such a backward time and such a strange land with no mass communication.  Jesus was seeking neither fame or fortune – he was seeking nothing that today’s mass media gives and which those who want stardom can’t resist.  Jesus built nothing like those who create media empires today.  He chose His time and place for a reason.

And when he got into the boat, his disciples followed him. And behold, there arose a great storm on the sea, so that the boat was being swamped by the waves; but he was asleep. And they went and woke him, saying, “Save, Lord; we are perishing.” And he said to them, “Why are you afraid, O men of little faith?” Then he rose and rebuked the winds and the sea; and there was a great calm. And the men marveled, saying, “What sort of man is this, that even winds and sea obey him?” 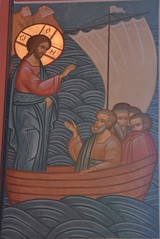 The disciples have seen all that Jesus did – healing all the sick, casting out demons, and they have witnessed the crowds being attracted to Jesus.  But now, when they experience their own personal miracle in the storm at sea, the best they can do is wonder about what kind of man Jesus is.  They wonder why the winds and sea obey Jesus, but besides being dumbfounded, they show little insight into understanding who Jesus is.  They apparently think there might be something special about Jesus, but they are not sure what!

And when he came to the other side, to the country of the Gadarenes, two demoniacs met him, coming out of the tombs, so fierce that no one could pass that way. And behold, they cried out, “What have you to do with us, O Son of God? Have you come here to torment us before the time?” Now a herd of many swine was feeding at some distance from them. And the demons begged him, “If you cast us out, send us away into the herd of swine.” And he said to them, “Go.” So they came out and went into the swine; and behold, the whole herd rushed down the steep bank into the sea, and perished in the waters. The herdsmen fled, and going into the city they told everything, and what had happened to the demoniacs. And behold, all the city came out to meet Jesus; and when they saw him, they begged him to leave their neighborhood. 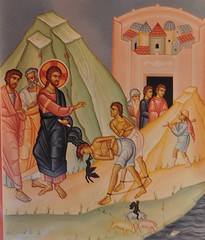 While the disciples are uncertain what to make of Jesus’ special powers, the demons have no doubt about who He is – the Son of God!  The demons show their powerlessness in the face of Christ.  They have to ask permission to leave.     The crowd this time reacts strongly to Christ – they expel him from their land.  The crowd of city dwellers perform their own exorcism of they land by begging Jesus to leave the neighborhood.  Jesus answers their prayer.

And getting into a boat he crossed over and came to his own city. And behold, they brought to him a paralytic, lying on his bed; and when Jesus saw their faith he said to the paralytic, “Take heart, my son; your sins are forgiven.” And behold, some of the scribes said to themselves, “This man is blaspheming.” But Jesus, knowing their thoughts, said, “Why do you think evil in your hearts? For which is easier, to say, ‘Your sins are forgiven,’ or to say, ‘Rise and walk’? But that you may know that the Son of man has authority on earth to forgive sins” — he then said to the Paralytic — “rise, take up your bed and go home.” And he rose and went home. When the crowds saw it, they were afraid, and they glorified God, who had given such authority to men. 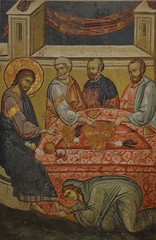 Jesus, now back on the Jewish side of the lake, performs another miracle, but some of the Jewish leaders are offended by Jesus’ words, thinking Jesus is a fraud or worse, they are accusing Jesus of leading people away from God.  On the other hand,  the crowd reaction is fear as they are astounded by what Jesus can do – and they are afraid of Him!  The proximity to divinity is terrifying, but really in this passage we are considering it is only the demons who obey Christ and declare Him to be God’s Son.

As Jesus passed on from there, he saw a man called Matthew sitting at the tax office; and he said to him, “Follow me.” And he rose and followed him. And as he sat at table in the house, behold, many tax collectors and sinners came and sat down with Jesus and his disciples. And when the Pharisees saw this, they said to his disciples, “Why does your teacher eat with tax collectors and sinners?” But when he heard it, he said, “Those who are well have no need of a physician, but those who are sick. Go and learn what this means, ‘I desire mercy, and not sacrifice.’ For I came not to call the righteous, but sinners.”

Jesus continues on His sojourn, now sitting to eat with a bunch of sinners rather than with those who were known to practice the faith.   These practitioners of the faith cannot understand why Jesus has table fellowship with people who are obvious sinners.   Jesus responds with the astonishing message that these sinners are exactly the people He is seeking out – hardly the kind of Messiah the righteous are working so hard for.

Seeing Jesus in context, we realize what it is for Him to be the Christ and the Son of God and the Lord.  He heals all, not just believers.  He eats with and has fellowship with sinners not just with the spiritual ascetics.  He flees from the crowds who would want to be empowered by Him make Him their earthly ruler.  He lives according to a Kingdom not of this world.  He does God’s will and brings God to all without wanting the prestige and power humans want to attribute to Him.   No wonder the disciples were so confused about who He is.

Jesus taught: “Go and learn what this means, ‘I desire mercy, and not sacrifice.'”