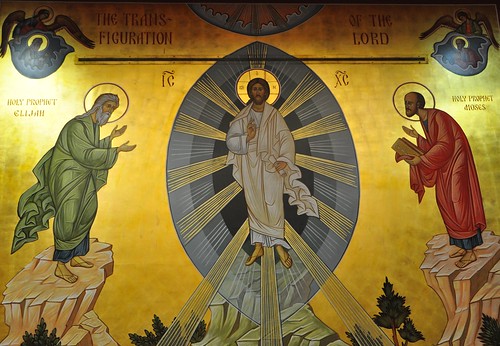 The 11th Century monk, Nikitas Stithatos,  comments on the Transfiguration of Christ (Matthew 17:1-9):

For those who like Peter have advanced in faith, and like James have been restored in hope, and like John have achieved perfection in love, the Lord ascends the high mountain of theology and is transfigured (cf. Matt. 17:1). Through the disclosure and expression of His pure teaching He shines upon them as the sun, and with the intellections of His unutterable wisdom He becomes radiant with light. They see the Logos standing between Moses and Elijah – between law and prophecy – promulgating the law and teaching it to them, and at the same time revealing to them through vision and prophecy the depths and the hidden treasures of wisdom. The Holy Spirit overshadows them like a luminous cloud, and from the cloud they hear the voice of mystical theology, initiating them into the mystery of the tri-hypostatic Divinity and saying, ‘This is My beloved, the Logos of perfection made manifest, in whom I take delight. Become for Me perfect sons in the perfect Spirit’ (cf. Matt. 17:1-5).    (THE PHILOKALIA, Kindle 39072-39082) 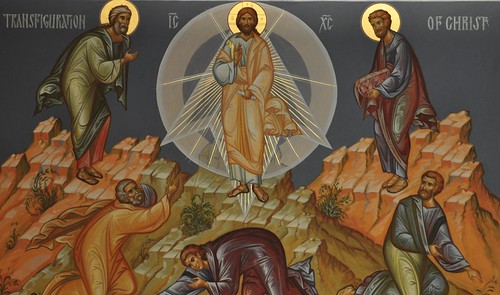 In the 14th Century, St Gregory Palamas wrote about the same Feast:

The flesh of Christ, it is said, is glorified at the moment of its assumption and the glory of the Godhead becomes the body’s glory. But this glory was invisible in His visible body to those unable to perceive that upon which even angels cannot gaze. Thus Christ was transfigured, not by the addition of something He was not, nor by a transformation into something He was not, but by the manifestation to His disciples of what He really was. He opened their eyes so that instead of being blind they could see. While He Himself remained the same, they could now see Him as other than He had appeared to them formerly. For He is ‘the true light’ (John 1:9), the beauty of divine glory, and He shone forth like the sun – though this image is imperfect, since what is uncreated cannot be imaged in creation without some diminution.   (THE PHILOKALIA, Kindle Location 49333-49341)