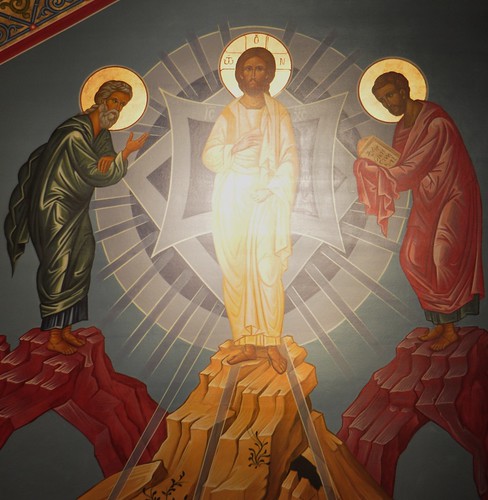 The Feast of  the Transfiguration of our Lord gives us a clear understanding of who Jesus is – one Person of the Holy Trinity and the incarnate God.  Consider the words of one of the festal hymns:

Christ, the Light that shone  before the sun, was on earth in the flesh.  In a manner fitting His divine majesty, He fulfilled His fearful dispensation before His crucifixion!  Today upon Mount Tabor He has mystically made known the image of the Trinity.  For taking apart the expressly chosen disciples, Peter, James and John, He led them up into the mountain alone.  Briefly, He concealed the flesh He had assumed, and was transfigured before them, manifesting the original beauty, though short of full perfection.  For He spared them as He assured them, lest seeing, they die.  Yest they saw as far as they could bear it.  He likewise called before Him the chief prophets Moses and Elijah, who testified to His divinity:  That He is indeed the true brightness of the essence of the Father, the Ruler of the living and the dead. (Vespers Hymn)

Christ is the Light of the world (John 8:12, 9:5) and He shone before there ever was a sun.  When we read in Genesis that God says in the beginning, “Let there be light” (Genesis 1:3), and we also read that the sun did not yet exist, we are to understand this light in Genesis is not sunlight, but represents something – or rather, Someone – else.  The Word of God is the Light of the world.  Christ is the Light that existed and who brought all things into being.  He is also the One who is the image (icon) of the Father, and in whose image we each are made.  He, the Light of the world, became flesh, and yet in the Transfiguration, He concealed that flesh to show the disciples His glory and the original glory of humanity.  The three disciples were able to see what was within their own power to see of divinity.  They were able to see, however imperfectly what humans were created to be and able to experience the unity of God and humanity. 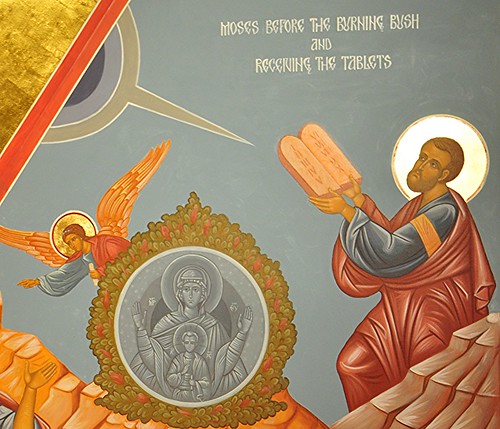 He who once spoke through symbols to Moses on Mount Sinai saying: “I am He Who is!”, was transfigured today upon Mount Tabor before the disciples.  In His own person He showed them the nature of mankind arrayed in the original beauty of the image.  Calling Moses and Elijah to be witnesses of this surpassing grace, He made them sharers in His joy, foretelling His death on the cross and His saving resurrection.   (Vespers Hymn)

It is the Word of God, Jesus Christ, who spoke to Moses but was still concealed from Moses, who is revealed at the Transfiguration.  Christ makes it possible for us to see God and to understand what our roll is in the world.  We come to realize God really does love the people of the world and created us to share in the divine life.