“For at present she is the only one who has a place in heaven with her divinely glorified body in the company of her Son.  Earth, the grave and death could not ultimately detain her life-giving body,  which has held God and been a more beloved habitation for Him than heaven and the heaven of heavens.  . . . 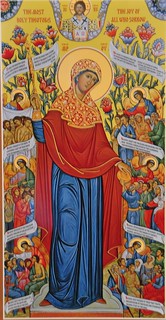 It is as though God wanted to set up an icon of everything good and in so doing, to display His own image clearly to angels and men, and thus He made her so truly beautiful.  Bringing together all the various means He had used to adorn all creation, He made her a world of everything good, both visible and invisible.  Or rather, He revealed her as the synthesis of divine, angelic and human loveliness, a nobler beauty to embellish both worlds, originating from the earth but reaching up, through her ascension now from the tomb to heaven, to the heavens beyond.  She untied things below with things above, and embraces the whole of creation with the wonders surrounding her.”