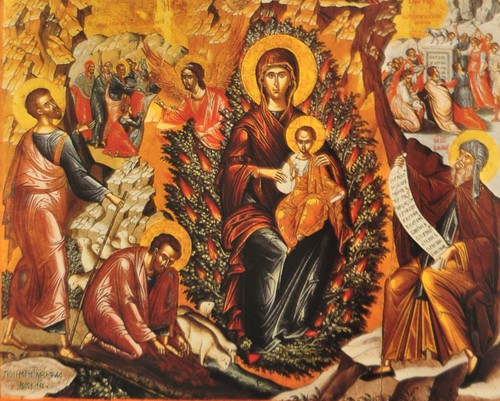 It seems to me that, already, the great Moses knew about this mystery by means of the light in which God appeared to him, when he saw the bush burning without being consumed (cf Ex 3:1ff). For Moses said: “I wish to go up closer and observe this great vision.” I believe that the term “go up closer” does not indicated motion in space but a drawing near in time. What was prefigured at that time in the flame of the bush was openly manifested in the mystery of the Virgin, once an intermediate space of time had passed. 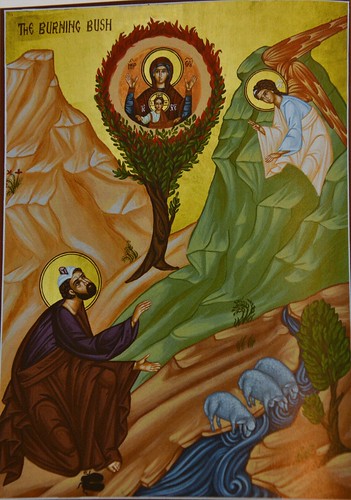 As on the mountain the bush burned but was not consumed, so the Virgin gave birth to the light and was not corrupted. Nor should you consider the comparison to the bush to be embarrassing, for it prefigures the God-bearing body of the Virgin.

(St Gregory of Nyssa, in Luigi Gambero’s Mary and the Fathers of the Church, p. 155)

Most amazing in the quote is that St. Gregory is way “ahead of his time” in thinking that Moses is able to foresee the incarnation in the Virgin because of a miraculous condensing of time which enabled him to experience a prefiguring in the burning bush of what was to happen in the womb of the Virgin.  It is not that Moses got closer physically to the burning bush, but somehow he crossed through time to get a glimpse at what God was planning.  This relativity of time that St. Gregory describes predates Einstein by 1500 years.