I recently finished reading Willard Swartley’s book, COVENANT OF PEACE: THE MISSING PEACE IN NEW TESTAMENT THEOLOGY AND ETHICS  , which I thought was an excellent read.  The book takes a serious look at the idea of peace in the New Testament as well as looking at the New Testament through the lens of peace.  The chapters which look at different books in the New Testament are in themselves a superb bible study.  Swartley posits that peace is central to the Gospel of Jesus Christ and to the life of all Christians who are to live at peace with each other as well as with all others in the world.

Swartley comes from a peace tradition denomination, the Mennonites, and while that certainly was an inspiration for his study, his content is valuable for all Christians to consider.  As the book’s subtitle suggests, he is concerned that current work in scripture scholarship and ethics underplays the role that peace has in the Gospel and entire New Testament.   For example, biblical scholar James Dunn’s monumental 734 page book THE THEOLOGY OF PAUL THE APOSTLE, has only one listing in the subject index for peace, but the word “peace” (Greek: eirene) occurs 44 times in the  greater Pauline corpus of writings.  Says Swartley: “Paul, more than any other writer in the NT canon, makes peace, peacemaking, and peace-building central to his theological reflections and moral admonition.” (p 190)

Swartley contends that peace not only is frequently mentioned in the NT but the theme of peace is central to understanding reconciliation and salvation. Christ is bringing peace between God and humans, between Jews and Gentiles, between believers and between humans and the rest of creation.

When he went out the next day, behold, two Hebrews were struggling together; and he said to the man that did the wrong, “Why do you strike your fellow?”  (Exodus 2:13)

And on the following day he appeared to them as they were quarreling and would have reconciled them into peace, saying, ‘Men, you are brethren, why do you wrong each other?’  (Acts 7:26)

Swartley notes that for whatever reason there is a tendency to downplay the role of peace in the New Testatment.  He points out or example that Acts 7:26 – is a reinterpretation of Exodus 2:13 in which Moses intervenes between 2 Jews who were fighting.  St. Luke, the author of Acts, adds a motivation for Moses not mentioned in the Exodus text – Moses tries to be a peacemaker and reconcile the two men.  Swartly points out that Acts 7:26 reads in Greek literally that Moses “appeared to them as they were fighting and sought to reconcile them into peace…”  BUT then he notes that almost no English translation includes the phrase “into peace” (eis eirenen).  Most English translations simple say Moses sought to reconcile them but eliminates any reference to peace  (p 156).    Swartley says the Greek mentions both reconciliation and peace which is trying to put emphasis on what Moses did, and yet English translators ignore the emphasis and even don’t bother to include the words  “into peace” in their translations at all.  This for Swartley is part of the evidence that “peace” is missing from much of modern biblical and ethical scholarship.

Additionally, Exodus 2:13 indicates that Moses ‘said to the one who was in the wrong, “Why do you strike your fellow Hebrew?”’    Moses only addresses the one who was attacking the other.   However, in Acts 7:26, St. Luke has Moses addressing both men as culpable, ‘Men, you are brothers.  Why do you wrong each other?’   Swartley notes: “By these differences Luke takes this event and portrays Moses as a peacemaker among his fellow Hebrews.  Moses is thus presented as reconciler between hostile parties and works to bring unity between two men fighting with each other”  (pp 156-157).  Luke reinterprets the Moses narrative, adding to it a peace dimension, making Moses into a peacemaker (and then strangely, the English translations of Acts drop the very idea that Luke emphasizes in his text!).

It is pretty amazing that St. Paul who gives warnings about the wrath of God does not declare Him to be the God of wrath, but does proclaim Him to be the God of Peace.  I also found it so intriguing that St. Paul only refers to God as the God of Love once, yet in the Johannine writings that God is love is central to the Gospel.  On the other hand, Swartley also notes: “Nowhere in the Johannine writings (Gospel, Epistles, and Revelation) are Jesus’ followers commanded to love their enemies.  Nor is there an explicit emphasis on reconciliation of enmity relationships  (p 276).”

So while we find in the New Testament both that God is love and that we are to love even our enemies, these two teachings are proclaimed by different New Testament authors.  Both are part of our Tradition, and it helps us to see why we need the diversity of writings and voices found in the New Testament.  It is a good indication as to why efforts to harmonize or homogenize divergent scripture texts are misguided.  The Scriptures do not represent one monolithic human viewpoint, but give us humans insight into the omniscience of God.

One other “statistic” which I found interesting in the book: “The specific term ‘kingdom of God’ is virtually absent from the OT” (p 15).  When we come to the New Testament, the New Covenant, we enter into a new creation as well.   The text of Isaiah 40:9, ‘Here is your God!’ is translated in the Isaiah Targum as ‘the kingdom of God will be revealed’  (p 94).  In Christ indeed God’s Kingdom is finally revealed, for Christ is Emmanuel, and where God is, there the Kingdom is for God comes in His kingdom. 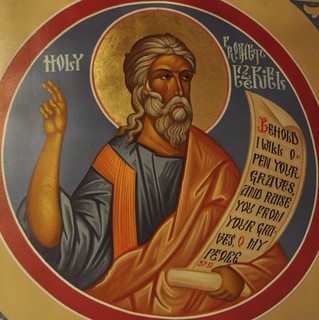 For the mountains may depart and the hills be removed, but my steadfast love shall not depart from you, and my covenant of peace shall not be removed, says the LORD, who has compassion on you.  (Isaiah 54:10)

Next: Christ Proclaims Peace. Christ Is Our Peace.