The events of Luke 1:5-25 describe the miraculous events which prophesied the conception of St John the Forerunner.  His parents, Zacharias and Elizabeth, were considered by God to be holy, and yet there earthly marriage had not been blessed with children, a very troubling sign for any believer in ancient Israel.

There was in the days of Herod, the king of Judea, a certain priest named Zacharias, of the division of Abijah. His wife was of the daughters of Aaron, and her name was Elizabeth. And they were both righteous before God, walking in all the commandments and ordinances of the Lord blameless. But they had no child, because Elizabeth was barren, and they were both well advanced in years.

The Gospel lesson for today is perhaps a hopeful message for any couple wanting to have a baby, but having a difficult time conceiving a child.  That being said, I don’t think that is the main lesson of this passage.  Rather than promising that childless couples will be given children, the very point of this lesson is that God was bringing about a rare and unusual event  – God is intervening in history and changing history for God is now working out His plan for the salvation of the world.  If Zacharias and Elizabeth already had 5-6 children, having another one wouldn’t be miraculous.   How would one know that God had helped bring it about, if it was already a common occurrence for this couple?    Like the Virgin birth of Jesus, the conception of John the Baptist is miraculous precisely because it is unheard of – an aged woman, past her natural childbearing years, gets pregnant.  Nature couldn’t make this happen – it happens because God has intervened in history to make something seemingly impossible to occur.  The Gospel narrative wants us to understand that what happens is an intervention from God, not something that was inevitable or natural or expected.

We see in this lesson both Elizabeth and her husband Zacharias are considered blameless, free of sin, and righteous before God.  So we know that their inability to conceive a child is not some punishment from God.  Having children is certainly considered blessed in the Scriptures, and to be unable to produce offspring was very troubling to couples as they had to wonder if they were somehow being punished by God for their sins.  But the Scriptures make it clear in this case, Elizabeth and Zacharias are not to  blame for having no children.  And we know from later in the Gospel lesson, that both of them had even prayed for children.  Here they are good people, righteous people, praying people, and yet their prayers had not been answered, and they did not receive the blessing they had hoped for.  And what they are hoping for – a child – is not something supernatural.  All they want is to have a normal life – they are only asking for something normal, not miraculous.  So we see that even the righteous and blameless don’t get everything they want, and sometimes are even denied a “normal” life.  We can all learn from Elizabeth and  Zacharias about dealing with life’s frustrations – no prosperity Gospel for these Gospel saints!  The story suggests now that they are old, they are no longer worrying about having children.  They remain faithful to God and have accepted their lot in life.  Even if friends and neighbors whisper about them that they must have sinned somehow and lost God’s favor – they were denied the natural joy of children because God was dealing with them.

We can learn from this, that we might not receive some blessings in life which we dearly want.  And it may not be because of sin, or because our prayers aren’t acceptable, or because God is ignoring us.  It may not be that our prayers are greedy or grasping – we might simply want to be normal, we might simply want what everyone else has, or what is natural to have.   Even saints in our tradition had to deal with disappointment, not having their holy dreams fulfilled, not being blessed as much as other people.  It is not necessarily a sign that one is in God’s disfavor. What may be happening is that God’s plan is being worked out but we have limited vision and cannot see the big picture or a big enough picture to understand what is happening in our lives.  Here is a call for us to trust the Lord God.

So it was, that while he was serving as priest before God in the order of his division, according to the custom of the priesthood, his lot fell to burn incense when he went into the temple of the Lord. And the whole multitude of the people was praying outside at the hour of incense. 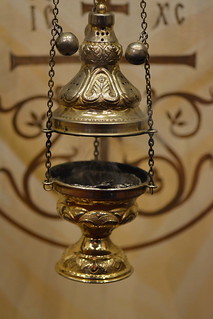 Then an angel of the Lord appeared to him, standing on the right side of the altar of incense. And when Zacharias saw him, he was troubled, and fear fell upon him. But the angel said to him, “Do not be afraid, Zacharias, for your prayer is heard; and your wife Elizabeth will bear you a son, and you shall call his name John. And you will have joy and gladness, and many will rejoice at his birth. For he will be great in the sight of the Lord, and shall drink neither wine nor strong drink. He will also be filled with the Holy Spirit, even from his mother’s womb. And he will turn many of the children of Israel to the Lord their God. He will also go before Him in the spirit and power of Elijah, ‘to turn the hearts of the fathers to the children,’ and the disobedient to the wisdom of the just, to make ready a people prepared for the Lord. 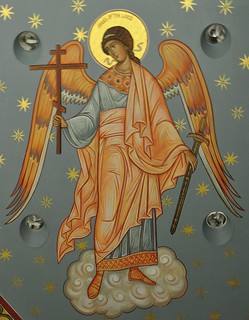 Zacharias is terrified at seeing an angel at the altar of incense.  But this angel tells him that God in fact has heard his prayer and that Elizabeth is going to get pregnant and give him a son.  This is a true miracle!  Not only will Zacharias be given a son, but this son is chosen and blessed by God, he will be filled with the Holy Spirit.  He is going to do God’s will.  The son is going to be everything a righteous priest might hope for.  It is worth waiting on the Lord, even if you have to wait 40 years before you receive a holy gift from God.

And we do learn in this a lesson about our prayer life, especially about constantly asking God to grant us things.  God hears our prayer, but answers them in His time.  We want everything to be done instantly, and God answers in eternity.  And we learn that we should be careful what we ask for ourselves in this world, because God is working out His eternal plan, and we might find God’s answer to our prayers to come at a time we least expect it, in a way we don’t want, and fulfilling His plan more than ours!

And Zacharias said to the angel, “How shall I know this? For I am an old man, and my wife is well advanced in years.”

But Zacharias may have been thinking, “Great, now that I’m an old man, now you are going to give me a son?  Why couldn’t you have done this 40 years ago when it mattered?  My wife and I are too old for this!”

And the angel answered and said to him, “I am Gabriel, who stands in the presence of God, and was sent to speak to you and bring you these glad tidings. But behold, you will be mute and not able to speak until the day these things take place, because you did not believe my words which will be fulfilled in their own time.

Zacharias was not convinced that the angel himself was enough evidence that something miraculous was to occur.  He demanded a sign, and so the angel gives him one – Zacharias is to be struck dumb, his voice is muted completely.  Later in Luke’s Gospel we realize Zacharias is apparently deaf as well (Luke 1:62-64).  He is completely silenced because he wouldn’t believe the voice of the angel – he can neither hear nor speak.  He is not going to be able to tell anyone what he saw, but will come to realize in due time that his wife in fact is pregnant.  And even when he realizes that, he still will be deaf and unable to speak, not knowing if God will ever allow him to hear anything but his own thoughts, yet never able to share them with others.

And the people waited for Zacharias, and marveled that he lingered so long in the temple. But when he came out, he could not speak to them; and they perceived that he had seen a vision in the temple, for he beckoned to them and remained speechless. So it was, as soon as the days of his service were completed, that he departed to his own house. Now after those days his wife Elizabeth conceived; and she hid herself five months, saying, Thus the Lord has dealt with me, in the days when He looked on me, to take away my reproach among people.

Perhaps one of the lessons here is be careful what you ask in prayer.   Make sure you ask for things that you will be happy with no matter how God answers your prayer or  when God chooses to answer it.  Ask only for those things that even if the prayer isn’t answered until 40 years later, you will still want to receive it!  Again, it is lesson to pray for things with an eternal significance, not things that we want immediately but are of no long term consequence. 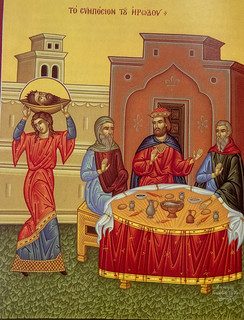 And be prepared to surrender the blessing you receive back to God.  For Zacharias and Elizabeth’s son would be executed by King Herod – not because their son did any evil.  For as the promise notes, their son will not even drink alcohol.  He will be holy, and even so, he will be martyred because of his faithfulness to God.

St. John the Forerunner, pray to God for us!

May we all want true holiness in our lives and in our families, even if that means we will suffer for the Lord.