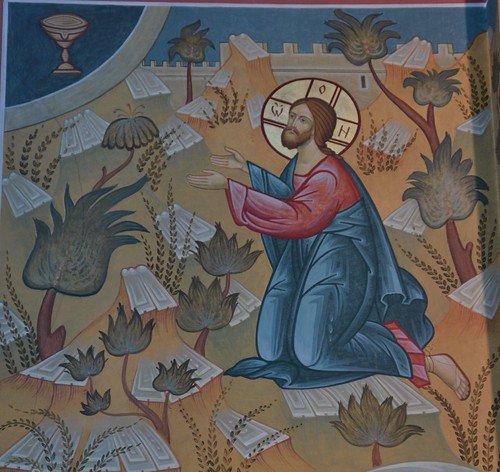 Then he withdrew from them about a stone’s throw, knelt down, and prayed, “Father, if you are willing, remove this cup from me; yet, not my will but yours be done.”  Then an angel from heaven appeared to him and gave him strength. In his anguish he prayed more earnestly, and his sweat became like great drops of blood falling down on the ground.  (Luke 22:41-44)

The particular scene described by St. Luke in the Garden of Gethsemane presents all kinds of challenges for Trinitarian believers who see Christ as the incarnate God.  Not the least of which is that an angel strengthens Christ!  Of course all kinds of explanations are offered always trying to balance the two natures in Christ – sometimes His divine nature is being portrayed and sometimes His human nature.  I  cannot resolve all those issues, and want only to mention one thought that this event brings to my mind. 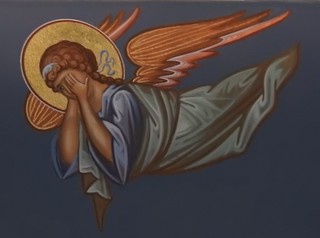 In his agony in Gethsemane, we see that Christ knows what it is to be human and knows what it is to have His heart crushed by the weight of life in this world.  He realized in this moment, in his humanity, why humans fail, why they fall in temptation and despair, why life seems more than many of us can bear.  Even His divinity could not spare Him from feeling all that we humans feel.  Perhaps even the angels could see and empathetically feel the crushing effect of the weight of the world on their Lord.  It is too much for them to bear.  But if He as Lord could not bear this weight, what could they do to help Him?  One thinks about Uzzah reaching out to steady the ark when the oxen stumbled (2 Samuel 6:6)!

The image of Christ bearing our sins and realizing the limits of human nature is moving indeed.  “He took our infirmities and bore our diseases” (Isaiah 53:4; Matthew 8:17) and “he  himself bore our sins in his body on the tree” (Isaiah 53:12; 1 Peter 2:24).  His agony is despite being God, He is experiencing our world, our life, our lives. 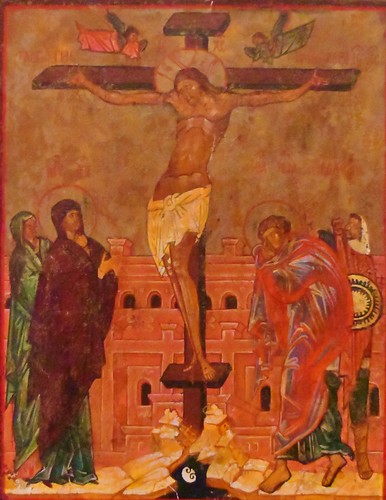 I recently finished the book RED RISING, which I thoroughly enjoyed.  I didn’t read it for any theological reason, but purely because one of my sons gifted it to me.  I read it for fun.  But there was one scene in the book which I thought theologically profound.  [SPOILER ALERT:  I am going to talk about something in the book which if you plan to read the book you may not want to know.  I will be a bit vague about this, and some of what I write here is what I read into the scene and how I reacted to it rather than just what the author said.]

The novel is placed in our dystopian solar system in which humans have managed to inhabit most of the planets.  But there is one class of people which rules the solar system with an iron fist.  It is a vile and violent rule and solar system where might = right, and the end justifies the means.  As one character is trying to earn his right to be in the ruling class, he realizes he has to do something spectacular to get the people to follow him instead of the other strong  and potential rulers.  He chooses a method which I was totally not expecting in the book.  He is faced with having to discipline one of his soldiers for raping another soldier.  The whole system is built on power and abuse.   All those with him are watching to see what he will do and he realizes no matter what he does, some may leave him and some may decide to betray him.   He orders the man to be beaten with 20 strokes, but then comes the amazing part – which I was not expecting at all.  He then says that they must also beat him with 20 lashes because as the leader, the failure of his followers are his failures as leader.  No one will be punished without him receiving an equal punishment.  And in the book he suffers from the punishment he receives, there is no symbolic beating.  They inflict serious pain on him.   His method so astounds everyone that they come to realize he really is special as a leader. 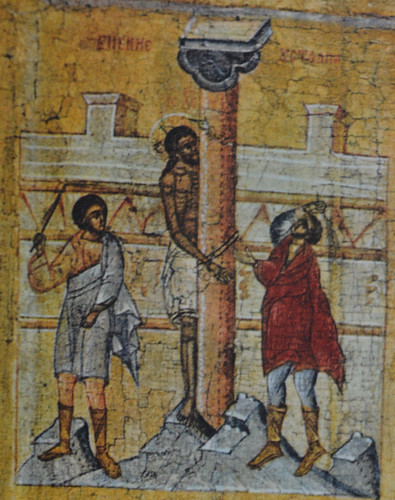 Needless to say, one sees Christ in this.  By His suffering, Christ says all the punishment that should be meted out to every sinner is to be meted out on Him.  Of course, Christ goes even further then the novel’s character as He takes on the punishment instead of us being punished, not in addition to it.  Additionally, this character in the story can be heroic but he also can be arrogant and foolish and wrong.  Nevertheless, in the story, the moment when he orders them to mete out his own punishment is profound.  It really allowed me to understand from a new perspective what it is that Christ has done for us.