Mary Magdalene turned round and saw Jesus standing, but she did not know that it was Jesus. Jesus said to her, “Woman, why are you weeping? Whom do you seek?” Supposing him to be the gardener, she said to him, “Sir, if you have carried him away, tell me where you have laid him, and I will take him away.”  (John 20:14-15) 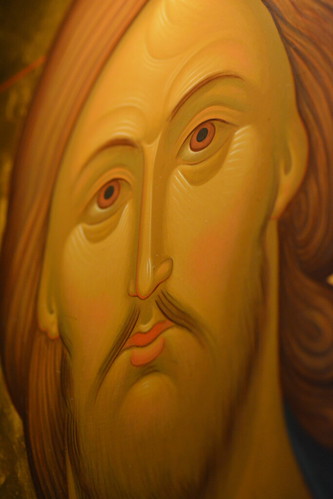 “In his prose poem Kristos (1878), Turgenev dreams that he is in a village church together with the peasant congregation. A man comes to stand beside him: ‘I did not turn towards him, but immediately I felt that this man was Christ.’ However, when eventually he turns towards him and he perceives ‘a face like everyone’s face. A face like all men’s faces…And the clothes on him like everyone else’s.’ Turgenev is astonished: ‘What sort of a Christ is this then?…Such an ordinary, ordinary man.; But he concludes: ‘Suddenly I was afraid  and came to my senses. Only then did I realize that it is just such a face – a face like all men’s faces – that is the face of Christ.’”   (Father Sergei Hackel, from The Time of the Spirit, p. 77)

That very day two of them were going to a village named Emmaus, about seven miles from Jerusalem, and talking with each other about all these things that had happened. While they were talking and discussing together, Jesus himself drew near and went with them. But their eyes were kept from recognizing him. . . .  And their eyes were opened and they recognized him; and he vanished out of their sight.  (Luke 24:13-16, 31)