“That is why when we have a new Adam who never grows old, “Who did no sin, neither was guile found in his mouth” (I Pet. 2:22), and whom we now possess as Father and forefather, Father of the age to come and prince of eternal life. He has taken away our sins and removed aging from our midst. This is Christ Jesus the Son of God, clothed in the flesh taken from the Virgin for our sake, the forefeast of whose birth we have begun to celebrate today, as we keep the commemoration of the Fathers who lived before and under the law, who shone forth on account of their virtue and godliness. Theirs were the prophecies and to them were the promises given, and from among them Christ was descended according to the flesh. 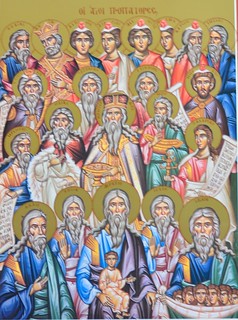 He was born as we are, but of a Virgin that He might recreate us from what is our own, and, through holy baptism, renew us and make us once more capable of containing the grace of the divine Spirit, clothing in righteousness and true holiness the man created after God in Himself. He accomplished this righteousness and holiness in His own person, putting the evil one finally to shame, in spite of all sorts of attacks, rightly obeying his Father to the end and showing that obedience to Him procures resurrection and true life.” 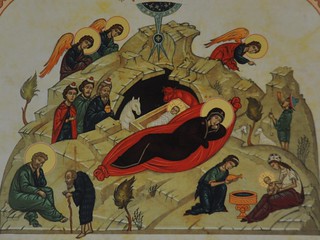