On the Sunday before the Nativity of Christ, we read the Gospel of the genealogy of Christ found in Matthew 1:1-25. 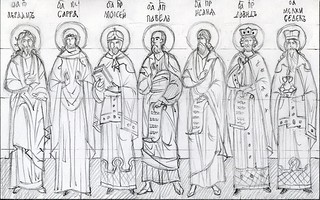 “Although the Virgin, of whom Christ was born according to the flesh, came from Adam’s flesh and seed, yet, because of this flesh had been cleansed in many different ways by the Holy Spirit from the start, she was descended from those who had been chosen from every generation for their excellence. Noah, too, “a just man and perfect in his generation,” as the Scriptures say of him, was found worthy of this election. 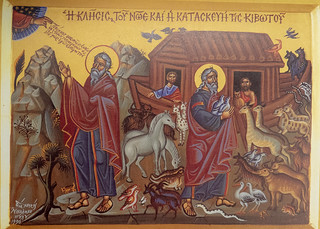 Observe also that the Holy Spirit makes it clear to such as have understanding that the whole of divinely inspired Scripture was written because of the Virgin Mother of God. It relates in detail the entire line of her ancestry, which begins with Adam, then Zerubbabel, those in between them and their ancestors, and goes up to the time of the Virgin Mother of God. By contrast, Scripture does not touch upon some races at all, and in the case of others, it makes a start at tracing their descent, then soon abandons them, leaving them in the depths of oblivion.  Above all, it commemorates those of the Mother of God’s forebears who, in their own lives and the deeds wrought by them, prefigured Christ, who was to be born of the Virgin. 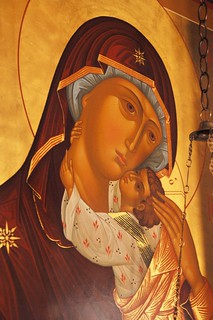 See how Noah clearly foreshadows Him Who was later to be born of the Virgin, for Whose sake the election was made. For Noah was shown to be the saviour, not of all the race of men in general, but of his own household, all of whom were saved through him. In the same way, Christ too, is the Saviour of the race of men, not of all men in general, but of all His own household, that is of His Church; not, however, of the disobedient. Furthermore, the name Noah can be translated to mean “rest” (cf. Genesis 5:29). But who is true “rest” except the Virgin’s Son, Who says, “Come unto Me through repentance, all ye that labour and are heavy laden with sins, and I will give you rest” (cf. St. Matthew 11:28), bestowing freedom, ease and eternal life upon you. 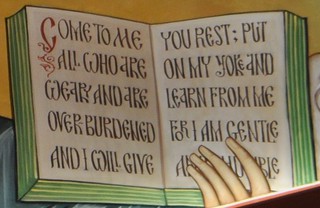