In the weeks before the Feast of the Nativity of Christ, quite a few Old Testament prophets and saints are commemorated in the Orthodox Church calendar.  Some have their individual feast days and some are commemorated among the forefathers and ancestors of Christ on the Sundays before Christmas.  On the Sunday after the Nativity one of our commemorations in the Orthodox Church calendar is of King David the Righteous One. 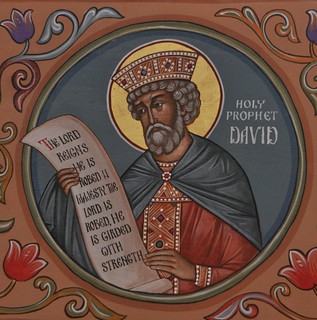 David exclaims, “Create in me a clean heart, O God.” A David who achieved so much, who won so many victories, who slew Goliath, strangled a lion barehanded, received great favor from the Holy Spirit, yet imploringly cries out: “Have mercy upon me, O God, according to Thy loving  kindness, according to the multitude of Thy tender mercies, blot out my transgressions.” One could imagine what the great king was thinking; I was a simple farmer and you made me a king, and when I became a king you appointed me to be a prophet. You made me victorious in war, victorious against Goliath. Not according to my own physical strength, but through the power of faith, which You also gave unto me. You vested me with royal garb and appointed me to a royal throne. You gave me wealth. That which sin hath destroyed, You O God, through Your Grace, gave back to us. “Then will I teach transgressors Thy ways, and ungodly men shall turn to Thee.” You ranked me so high that You gave me the ability and vision to know and prophesy Your only begotten Son. I have been taught that You have a Son begotten of woman, with the same authority as you have. I told of the good news of His crucifixion, His death and descent from the heavens and of His glorious resurrection. I spoke of His trial, of man’s salvation. I foretold of the apostles’ calling.

David thunders, “For behold, Thou lovest truth; Thou has manifested to me the secret and hidden things of Thy wisdom.” The prophet testifies of the Lord’s descent upon the earth: “He shall come down as rain upon a fleece; and as drops falling upon the earth.” (71:8). And truly, when the Son of God descended, He did not arrive via earth-shaking thunderous clamor, He did not bear a pure divine form, He came as a man. Had He come in a pure divine form, neither could the mountains, nor the Sun endure the same. Its light would have been blown out, the earth – destroyed, and all those who dwelleth upon it perished. He came quietly without fanfare. Even his birth was humble, in a Virgin‘s womb with shepherds and adoring animals as witnesses. 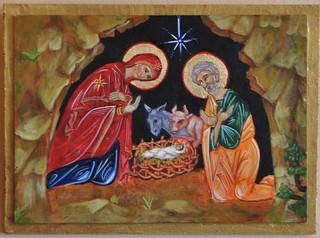