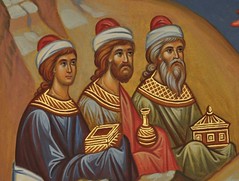 In Homily Two [John Chrysostom] adverts to the parable of the talents (Mt. 25:14-30), from which the appropriate lesson for an Antiochene is that we must all make our own contribution if we are to win God’s favor:

“What is looked for by God even among human beings, you see, is not whether we come up with little or much, but making an offering that is in no way less than the ability we have.”

St. John Chrysostom says it is not how much you start with that matters, it is what you do with what God gives you.  We need not be jealous of what others have or even what they do with what they are given.  We can be grateful for what we have and for what God gives others as well.  Anthony de Mello offers the following story:

“Here is the Good News proclaimed by our Lord Jesus Christ:

Jesus began to teach in parables.   He said:

The kingdom of God is like two brothers who were called by God to give up all they had and serve humanity.

The older responded to the call generously, though he had to wrench his heart from his family and the girl he loved and dreamed of marrying. He eventually went off to a distant land where he spent himself in the service of the poorest of the poor. A persecution arose in that country and he was arrested, falsely accused, tortured and put to death.

And the Lord said to him, “Well done, good and faithful servant! You gave me a thousand talents’ worth of service. I shall now give you a billion, billion talents’ worth of reward. Enter in the joy of your Lord.”

The younger boy’s response to the call was less than generous. He decided to ignore it and go ahead and marry the girl he loved. He enjoyed a happy married life, his business prospered and he became famous and rich. Occasionally he would give alms to the poor.

And when it was his turn to die, the Lord said to him, “Well done, good and faithful servant! You have given me ten talents’ worth of service. I shall now give you a billion, billion talents’ worth of reward. Enter into the joy of your Lord!”

The older boy was surprised when he heard that his brother was to get the same reward as he. And he was pleased. He said, “Lord, knowing this as I do, if I were to be born and live my life again, I would still do exactly what I did for you.”