trampling down death by death

and upon those in the tombs bestowing life. 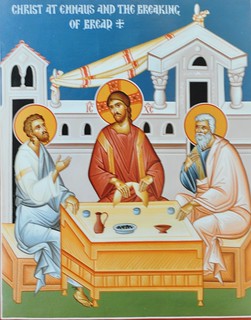 “You have heard, dearly beloved, that the Lord appeared to two disciples while they were walking on the road. They were talking about him, even though they did not believe. He did not show them an appearance which they could recognize, but the Lord behaved before the eyes of their bodies in accord with what was going on inwardly before the eyes of their hearts. Within themselves they were both loving and doubting; and the Lord was present to them out. outwardly, but did not show them who he was. He manifested his presence to them as they talked about him, but hid the appearance by which they would recognize him on account of their doubts. He did indeed talk with them, reproving the hardness of their understanding and opening to them the mysteries of holy scripture concerning himself: and yet, because as an object of faith he was still a stranger to their hearts, he made a pretense of going on farther. One can make a pretence as one can make a pot. On this occasion the perfect Truth did nothing deceitful; he was only manifesting himself to them materially as they were thinking of him. It had to be shown whether those who did not as yet love him as God were at least able to love him as a stranger. Since those with whom Truth was walking couldn’t be alien to charity, they invited him, a stranger, to be their guest. 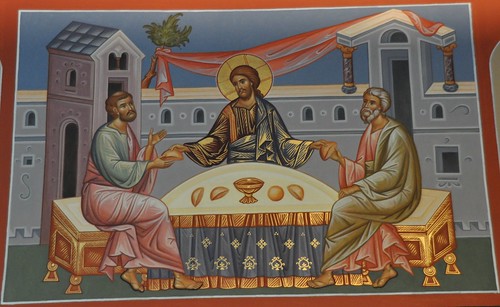 But why do I say they invited him, when it is written that they compelled him? We must surely infer from this example that strangers are not only to be invited to be guests but even forcibly persuaded. They set the table, brought food, and recognized in the breaking of the bread the God they did not know as he explained the sacred scriptures. They were not enlightened by hearing God’s commandments, but by their own actions, for it is written, It is not hearers of the law who are righteous before God, but doers of the law will be made righteous. Let anyone who wishes to understand what he has heard be quick to fulfil in action what he has already been able to understand. The Lord was not recognized when he was speaking, but he deigned to be recognized as he was being fed.”