Great indeed, we confess, is the mystery of our religion: He was manifested in the flesh, vindicated in the Spirit, seen by angels, preached among the nations, believed on in the world, taken up in glory.   (1 Timothy 3:16) 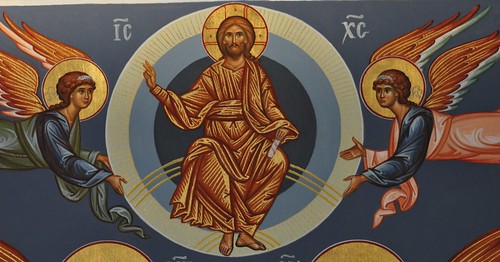 One of the surprising insights of the Feast of the Ascension is that in glory Christ ascends from the earth to heaven.  In other words, Christ does not ascend to get to His glory, He is already in glory before He begins to ascend.  Glory (shekinah) is not something that Christ has to go to heaven to get or to return to.  As St Irenaeus wrote: “The glory (shekinah) of God is a human being fully alive.” Christ is in glory on earth in His humanity.  Indeed He is the King of Glory.   The fact that in glory He ascends, amazes the Bodiless Powers, for they are in wonder that God’s glory is ascending from earth to heaven rather than the other way!  As we sing in one of the Vespers hymns for the Ascension:

Not parted from the Father’s bosom, O sweetest Jesus,
and having lived among those on earth as man,
today You have been taken up in glory from the Mount of Olives,
and exalting in Your compassion our fallen nature,
You have seated it with the Father.
Therefore the heavenly ranks of the Bodiless Powers were amazed at
the wonder, and beside themselves with fear;
and seized with trembling, they magnified Your love for mankind.

Some of the earlier church fathers who believed in a tiered universe thought it is exactly because Christ is in glory on earth that He can ascend bodily through the aerial demonic realms unscathed on His way to heaven.  His glory conceals from the demons the incarnation and His humanity. Thus in this ancient worldview, the demons who stood as guards to prevent humans from bodily entering the spiritual realms don’t realize humanity has just passed them by and entered into heaven at the Ascension because they see in the ascending Christ only glory.  The angels in heaven are amazed as they see humanity enter into the spiritual realm of heaven – the divinity of Christ now hidden by His humanity. 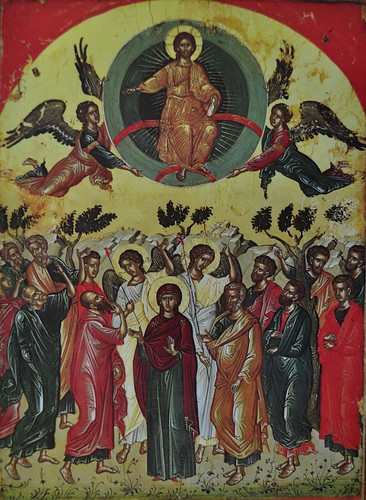 When You ascended in glory, O Christ our God,
while the Disciples looked on.
The clouds received You with Your flesh;
the gates of heaven were lifted up;
the choirs of Angels rejoiced with gladness;
the higher Powers cried out, saying:
“Lift up your gates, you princes,
and the King of Glory will come in!”

Christ doesn’t ascend to glory or to his glory, He has the glory on earth and in glory He ascends in.  The incarnate Christ gives the proper glory to humanity as He says to the Father:  “The glory which you gave me I have given to them, that they may be one, as we are one; I in them and you in me…” (John 17:22-23)

The notion that Christ is in His glory as the incarnate God, as a human, and that in glory He ascends from earth to heaven (rather than ascending from earth to attain His glory)  is paralleled in the Third Antiphon of the church when we sing: Remember us, O Lord, when you come in your kingdom (not into your kingdom as some versions mistakenly have it).  Christ comes in His kingdom, in his glory – his glory and kingdom are wherever He is; it is not the case that He has to come into His kingdom (as if He is ever outside the Kingdom and has to wait until the day that he enters into the Kingdom).

May the glory of the LORD endure for ever, may the LORD rejoice in his works… (Psalms 104:31)