As we approach in the United States our Independence Day holiday, we have much for which to give thanks in our country – so many blessings received.  Even with all the political divisiveness and social problems, many of us have prospered and have been able to enjoy some of the blessings which have been given our country.

I usually try to read a history book about America around the July 4th holiday, and I recently finished reading David McCullough’s really superb book, The Wright Brothers.  And I found an Orthodox connection to the Wright Brothers.  Of course there is the icon at St. Paul Church in Dayton, OH, which has the Wright flyer in the sky over Dayton.  It is an icon of the Protection of the Theotokos over Dayton.  The Virgin is not flying over or even floating above the city, but interceding before God in heaven.  The Wright flyer in the icon helps locate the city of Dayton in time and place. 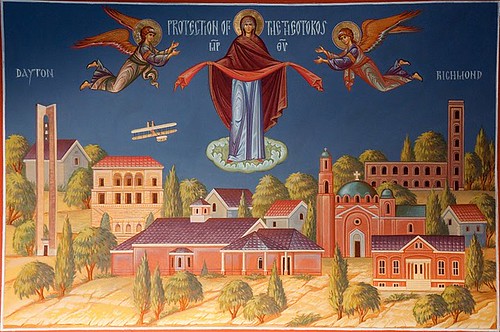 So what connection is there between the Wright Brothers and Orthodoxy?

French journalist Francois Peyrey had taken a great interest in the Wright Brothers plane and in their work ethic.  He wrote a great deal about the Wright Brothers, especially Wilbur who spent time in France to unveil the flyer, as France was the first nation to take a real interest in their heavier than air flying machine.  Peyrey found Wilbur a fascinating person with his all work and no play attitude. 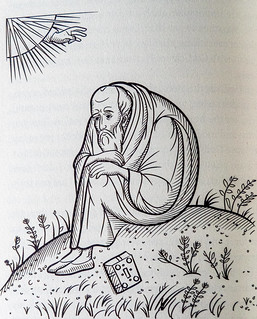 At the close of one long day at Le Mans, Peyrey had caught Wilbur gazing off into the distance as if in a daydream. It reminded him, Peyrey wrote, “of those monks in Asia Minor lost in monasteries perched on inaccessible mountain peaks. . . . What was he thinking of this evening while the sun was dying in the apricot sky?”   (Kindle Location 2639-2641)