Sometimes we reduce sin to a notion of breaking a few commandments.  And as serious as believers might consider that, St Paul takes sin to an entirely different level.  For he portrays sin as horrific, brutal and inhumane – enslaving us, and thus forcefully dehumanizing us.  He writes:

But thanks be to God, that you who were once slaves of sin have become obedient from the heart to the standard of teaching to which you were committed, and, having been set free from sin, have become slaves of righteousness. I am speaking in human terms, because of your natural limitations. For just as you once yielded your members to impurity and to greater and greater iniquity, so now yield your members to righteousness for sanctification. When you were slaves of sin, you were free in regard to righteousness. But then what return did you get from the things of which you are now ashamed? The end of those things is death. But now that you have been set free from sin and have become slaves of God, the return you get is sanctification and its end, eternal life. For the wages of sin is death, but the free gift of God is eternal life in Christ Jesus our Lord.  (Romans 6:17-23) 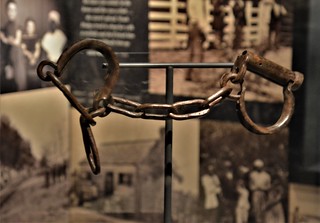 For each of our impulses, when it takes control, becomes the master and we the slave. Like a tyrant it seizes the citadel of the soul, and by means of its underlings plays havoc with its subjects, using our own thoughts as the servants of its good pleasure. There they are: anger, fear, cowardice, arrogance, pleasure, grief, hatred, spite, heartless cruelty, jealousy, flattery, bearing grudges and resentment, and all the other hostile drives within us – there is your array of the masters and tyrants that try to enslave the soul, their prisoner of war, and bring it under their control. (From Glory to Glory, p. 89)