When I was in the spectacular Yellowstone National Park, we were brought to a complete halt several times by the wildlife.  It was awesome to see, and makes one wonder what North America was like  250 years ago when the United States was first being formed as a nation.

However, in Dayton, we too encounter wildlife which brings traffic to a standstill.  One realizes one does not have to go far from home to see the wonders of nature.  It is amazing how the National Park System changes us –  for when driving around town wildlife seems a nuisance which we impatiently endure, but in the Parks we are awed and stop frequently for no other reason than to watch the wildlife. 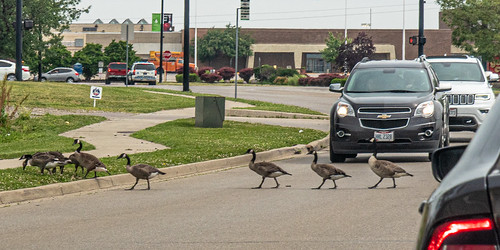