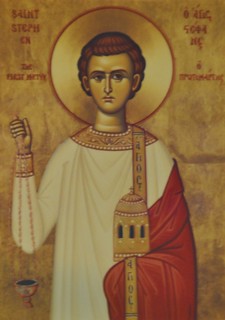 “In addition to serving as their bishops’ factotums, deacons played an important liturgical role. As early as the middle of the second century, we learn something of this from Justin Martyr, who relates that, after the Eucharist was concluded, deacons would bring it to those who had been unable to attend. Other sources tell us that deacons maintained order in the church, guarded the doors, recited or chanted certain prayers, instructed catechumens, and proclaimed the Gospel. This last function came to be particularly associated with them. At the same time it was recognized that the deacon had a special relationship to the eucharistic chalice. An anonymous fifth-century Gallic work tells us that, according to what must have been a local custom, a bishop might not even lift the chalice from the altar unless it had first been handed to him by his deacon. Deacons also assisted at the baptism of men, while in some places, especially in the East, there were women deacons to assist at women’s baptism and to perform other services on behalf of women.

…Clearly the diaconate was a position of high importance in early Christianity, and the list of those who as deacons (whether or not they were later promoted to the presbyterate or the episcopate) engaged in significant enterprises on behalf of their bishops or the Church at large includes not only such figures as Callistus and Laurence but also Ephrem, John Cassian, and Gregory the Great. Toward the end of the patristic period, however, the diaconate began to lose its status, and it would eventually turn into a perfunctory step in preparation for ordination to the priesthood. It is interesting to  note that, over the course of the centuries, as the responsibilities of the diaconate decreased, those of the presbyterate increased.”