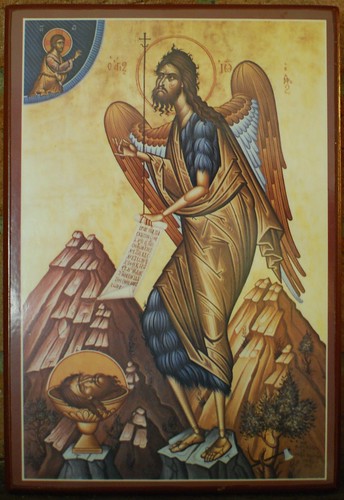 Blessed are you, the greatest of prophets

all of whom desired him from a distance.

They longed for but did not see the Messiah, the Son,

but you placed your hand on His head.

Clothed in the Law, you exhibited zeal;

arrayed in the Messiah, you showed mercy.

In you descended and came Elijah, who has not come [otherwise],

whom you, in fact, represented.

On August 29 we commemorate the Beheading of St John the Forerunner, known as the Friend of the Bridegroom, who Jesus described as the greatest man born of women.  The hymn for the day:

The memory of the righteous is celebrated with hymns of praise, / but the Lord’s testimony is sufficient for you, O Forerunner. / You were shown in truth to be the most honorable of the prophets, / for you were deemed worthy to baptize in the streams of the Jordan Him whom they foretold. / Therefore, having suffered for the truth with joy, / you proclaimed to those in hell God who appeared in the flesh, / who takes away the sin of the world, / and grants us great mercy.