On September 5 we Orthodox commemorate the Holy Prophet Zechariah and Elizabeth, the parents of St John the Forerunner.  Their narrative is found in Luke 1:5-80.

Everything we know about the blessed Saints Zechariah and Elizabeth is contained in one chapter of the Bible – Luke 1.  There is something very humbling in this fact.  How little we know about this holy married couple.  Their memory has been praised throughout the 2000 year history of Christianity, yet all that we know about them is contained in about 60 bible verses of one chapter.  From the perspective of the history of the world, there role is very small though unique.  God called them to achieve one particular thing – to give birth to the last Old Testament prophet, the prophet who would herald the coming of the Messiah.  They accomplished their God-given task and are honored both by God and the Church ever since.

Interestingly, St Luke begins his entire Gospel account with the story of Zechariah.  Zechariah is chosen to offer incense before the Lord in the Jerusalem Temple.  This tiny event marks for St Luke the beginning of the New Covenant between God and His people.  The beginning of the salvation of the world is ignited when one Jewish priest burns some incense in the Temple.

Zechariah marks the end of the Old Testament and the beginning of the entire new covenant.  Yet after his experience in the Temple of God he will not appear again in the entire bible.   St Luke thought him significant enough to begin the Gospel with his story, but no other New Testament author even mentions Zechariah.

God has assigned for each of us a special task to accomplish in the world.  However great or simple, however significant or small, our salvation is linked to this task God has given us each to do.  God chooses you specifically to accomplish the task only you can do.  Each of us is irreplaceable in God’s plan for our salvation.  The best way to know what our task is, is to be a person of prayer.  By constantly being in God’s presence and by keeping our heart looking toward God, we will be given the guidance we need to accomplish our unique task.  Being God centered, living a godly life, meditating on God’s Word, worshiping God, all help us to realize what it is God has created us to do.

St Luke says Zechariah and Elizabeth were both righteous in God’s eyes, without any fault in keeping God’s commandments.  They each had a prayer life and studied God’s teachings, living according to those teachings.  Thus they prepared themselves to do God’s will.

But note, according to St Luke they were judged harshly by many as being cursed since they had no children.  However, their righteousness was seen by God and they were favored by God even though in the world they had no physical or spiritual reward from God which they could show to others.

Zechariah is an example of a truly prayerful person.  Pure prayer emerges from a righteous person.  Prayer shapes our hearts and mins to conform to the will of the loving and merciful God.

Zechariah, the man concerned with pleasing God hears the words of the angel: “Your prayers have been heard.”  What does Zechariah do when he learns God has actually accepted his prayers?

He trembles with fear!

What would you do if God told you He was going to grant you everything you asked for in prayer?   You might think you had just found the greatest Genie in the world.  But are you willing to be responsible for what happens to the world if God grants all of your silly or self-centered wishes?  For if God gives you all you wish for, so too will God hold you to account for all that happens as your will ripples out into the world.

Think about the poor Zechariah after the angel spoke to him.  Not only was he an old man and childless, but now dumb and deaf too!   He hardly seems to be the image of a man blessed by God.  But if we were to judge him for all that is apparently wrong in his life, we would be so wrong, for this is a man whom God considers righteous and blameless even though for all appearances he seems cursed in life. 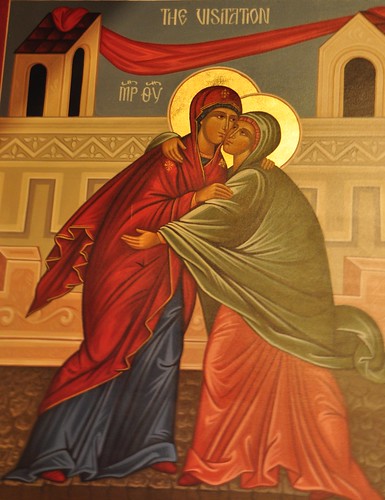 Finally a few thoughts about Elizabeth.  She too is considered righteous and humble.  No angel speaks to her to tell her what is happening.  She has lived a long life, quietly faithful to God yet harshly judged and gossiped about by family and neighbors because she has no children.  No doubt they made fun or her and condemned her for sins real or imagined.  Now her husband comes home deaf as a door nail and unable to tell her about God’s favor.

These two saints lived long lives in faithfulness to God, but had little to show for it – at least until the end of their lives when God blessed them with one child.  That child is the forerunner of the salvation of the world.