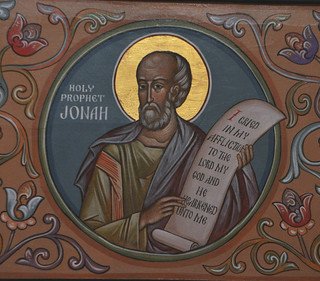 The Holy Prophet Jonah is perhaps best remembered for trying to flee from the Lord, so that he wouldn’t have to do the Lord’s will since he found it disagreeable that the Ninevites, enemies of Israel,  might be given opportunity by God to repent and be saved.   As we read in the Book of Jonah:

Now the word of the LORD came to Jonah the son of Amittai, saying, “Arise, go to Nineveh, that great city, and cry against it; for their wickedness has come up before me.” But Jonah rose to flee to Tarshish from the presence of the LORD. He went down to Joppa and found a ship going to Tarshish; so he paid the fare, and went on board, to go with them to Tarshish, away from the presence of the LORD.
But the LORD hurled a great wind upon the sea, and there was a mighty tempest on the sea, so that the ship threatened to break up.  ...  (Jonah 1:1-4)

Try as he might to flee from the presence of the Lord, Jonah discovered God is everywhere, one is never away from the presence of the Lord.  And though we have free will to choose in life anything other than God’s will, God is able to outlast us in any game of hide and seek or in any staring contest we might want to engage with God.  It is pretty hard to beat an eternal being in time, though we often are willing to try to play the game.   What is amazing about God in the Jonah story is that God saves Jonah from the belly of the whale while Jonah is trying to flee from God (the belly is certainly a symbol of Sheol – the place of the dead, and the whole story is a resurrection story and a prefiguring of Christ’s resurrection, at least as Christ and His followers read Jonah) .  Jonah is not saved because he is trying to do God’s will, but is saved despite his effort to thwart God’s will.  Think about that – Jonah is saved despite clearly rejecting holiness.  Jonah has worked his way to his Sheol, just like Adam did – by disobeying God.  Yet, Jonah is saved from the consequences of his own behavior.  No eternal punishment for the disobedient in this prophecy. 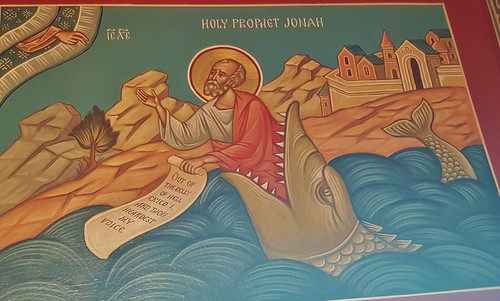 In the writings of the desert fathers, Abba Issac has his own Jonah moment, though in the end he agrees to God’s will a lot more easily than Jonah ever did.  Even saints do not always want to do the will of God, and some do it only grudgingly.  Humans are headstrong and strong willed to their deaths.  So we read in the desert fathers:

Once they came to make Abba Isaac a priest. When he heard, he fled into Egypt, went into a field, and hid amidst the crop. The fathers went after him and, when they got to the same field, sat down to rest a little there, for it was night. They set the ass free to pasture, but the ass went and stood by the elder. When they sought the ass at dawn, they found Abba Isaac too. They were amazed and wanted to bind him but he would not let the. “I am not running away any more,” he said, “for it is the will of God and no matter where I run away to, I will come to it.”   (Isaac of the Cells, Give Me a Word: Alphabetical Sayings of the Desert Fathers, p. 147)

No matter where we might run to get away from God, we will find God present there.  That is the mercy of an omnipresent God!

Jonah’s complaint with God is that God is too forgiving and merciful, and Jonah makes it clear that he disapproves of God’s nature:   But it displeased Jonah exceedingly, and he was angry. And he prayed to the LORD and said, “I pray you, LORD, is not this what I said when I was yet in my country? That is why I made haste to flee to Tarshish; for I knew that you are a gracious God and merciful, slow to anger, and abounding in steadfast love, and ready to relent from punishing.”    (Jonah 4:1-2)   While it is true of God that:  “He will not always chide, nor will he keep his anger for ever” (Psalms 103:9), that was not true of Jonah who was unforgiving of the Ninevites and hoped they all would be destroyed and perhaps sent to hell for all eternity.  Fortunately for us, God is far more loving, forgiving and merciful than his saints!  We may never find reason to forgive someone or their offense in our lifetime.  On the other hand, since God is not bounded by time, God can afford to be eternally patient with us and forgive us in the world to come.

We  commemorate the Holy Prophet Jonah on September 22.