Writing in the 2nd Century, St Justin Martyr (d. 165AD) describes the Liturgy with which he was familiar.  We can see in his description of the Liturgy common elements with how the Liturgy is still being celebrated today in the Orthodox Church.  He also emphasizes at the beginning that in the Liturgy the Christians are praying for everyone in the world, not just for Christians.  Christianity saw itself as a light to the world, not a light for Christians only.  They were the salt of the earth, not to be kept isolated and pure in a salt shaker, but being part of the world – the entirety of which Christ came to save.

We pray in common, for ourselves and for everyone…to attain to the knowledge of truth and grace…to keep the commandments…When the prayers are over we give one another the kiss of peace. Next, bread and a cup of wine mixed with water are brought to the president of the assembly of the brethren. He takes them, praises and glorifies the Father of the universe in the name of the Son and the Holy Spirit, then he utters a long eucharistic prayer as a thanksgiving for having been judged worthy of these blessings. 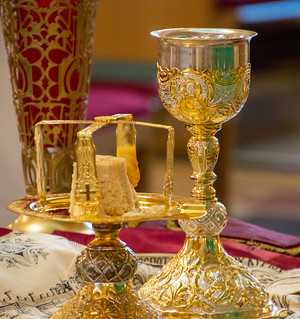 When he has finished the intercessions and the eucharistic prayer all the people present exclaim Amen. Amen is the Hebrew word meaning “So be it”. When the president has finished the thanksgiving and all the people have responded, the ministers whom we call deacons distribute the consecrated bread and wine to all who are present and they take some to those who are absent.

(from Olivier Clement’s The Roots of Christian Mysticism, p. 107)