“I therefore, a prisoner for the Lord, beg you to lead a life worthy of the calling to which you have been called, with all lowliness and meekness, with patience, forbearing one another in love, eager to maintain the unity of the Spirit in the bond of peace. There is one body and one Spirit, just as you were called to the one hope that belongs to your call, one Lord, one faith, one baptism, one God and Father of us all, who is above all and through all and in all.” (Ephesians 4:1-6)

St Paul came to the realization that God willed the salvation of the human race, not just the Jewish race.  He came to understand that the Law given to help humans do God’s will had not accomplished its goal and had in fact divided humanity with Jews believing they were to have nothing to do with Gentiles.  St Paul came to the startling conclusion that God was saving all humans and in so doing reuniting them all into one people, no longer two separated by the Law.  However, realizing this truth was one thing, actualizing it in community life proved to be quite a difficult challenge.  For St Paul was telling Jews to embrace Christ’s love and sit and eat with the Gentiles because all the rules for keeping Torah or keeping Kosher were not the way to salvation.  Salvation is love for God and neighbor which the Law cold never realize.

What drove Paul to see that Jew and gentile now constitute one people of God was not his own imagination or sense of social justice, and it certainly was not his “straight” reading of his Bible. If anything, putting Jew and non-Jew on the same level cuts against the Old Testament grain. What drove Paul to this revolutionary, countercultural conclusion was the reality of the resurrection of Christ.   (Peter Enns, The Evolution of Adam, What the Bible Does and Doesn’t Say about Human Origins, Kindle Loc. 2989-92) 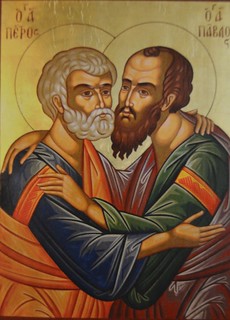 What St Paul came to understand is the importance of Adam: Christ restores all humans to the one undivided humanity which existed before the Fall.  Adam is not mostly the 1st historical human but the type of all prefallen humans.  Adam is not about biological origins but truly falls to that level of a mere biological being through sin.   Christ comes to restore the full nature of humanity, to reunite the physical and the spiritual, created and Creator, humanity and divinity, the living and the dead, Gentile and Jew.

In [Romans] 1:14 he announces his universal focus when he states his obligation to both Greeks and non-Greeks (v. 14), claiming that the gospel is for the Jew first, but then also for the gentile (v. 16). This is not just a polite way to begin a letter, but an announcement of the letter’s focus: one gospel for two heretofore distinct peoples.  (Peter Enns, The Evolution of Adam, What the Bible Does and Doesn’t Say about Human Origins, Kindle Loc. 3008-11) 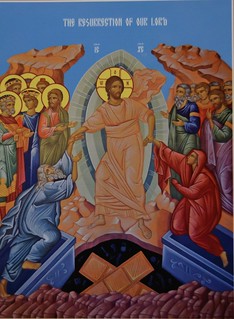 The sin of Adam and Eve led to the giving of the Law which resulted in a division in humanity between Jew and Gentile.  However, the Law was meant to give life to all humanity.  The fact that it had caused division rather than bringing about wholeness is in fact the limit of the Law.  The healing of humanity, the end of all separation and divisions, begins in Christ.