Jesus told the following parable about a banquet that the invitees declined to attend:

But he said to him, “A man once gave a great banquet, and invited many; and at the time for the banquet he sent his servant to say to those who had been invited, ‘Come; for all is now ready.’ But they all alike began to make excuses. The first said to him, ‘I have bought a field, and I must go out and see it; I pray you, have me excused.’ And another said, ‘I have bought five yoke of oxen, and I go to examine them; I pray you, have me excused.’ And another said, ‘I have married a wife, and therefore I cannot come.’ So the servant came and reported this to his master. Then the householder in anger said to his servant, ‘Go out quickly to the streets and lanes of the city, and bring in the poor and maimed and blind and lame.’ And the servant said, ‘Sir, what you commanded has been done, and still there is room.’ And the master said to the servant, ‘Go out to the highways and hedges, and compel people to come in, that my house may be filled. For I tell you, none of those men who were invited shall taste my banquet.'”  (Luke 14:16-24)

He said also to the man who had invited him, “When you give a dinner or a banquet, do not invite your friends or your brothers or your kinsmen or rich neighbors, lest they also invite you in return, and you be repaid. But when you give a feast, invite the poor, the maimed, the lame, the blind, and you will be blessed, because they cannot repay you. You will be repaid at the resurrection of the just.”   When one of those who sat at table with him heard this, he said to him, “Blessed is he who shall eat bread in the kingdom of God!”

Jesus begins by describing His idea about divine love.  If you want your love to be heavenly, then you have to love more than the most moral or generous people do.  Mutual gift exchanges or being good to those who are good to you are both positive and right behaviors, but they do rise to the level of being extra loving.  They are rather behaviors  that simply pay back people for the things they do for you.  Moral.  Yes.  But divine or heavenly?  No.  God does bless the unjust and sinners as He does the righteous bestowing air, sunshine, rain on all.  These blessings are not earned, they are free for everyone.  If you want to love as God loves, then you have to give to those you don’t like or who don’t deserve it.  A true agape dinner is given for those who cannot repay you or who can do nothing for you.

Christ’s teaching then causes someone sitting at the table to eat with Jesus to recognize the blessedness of the person who is invited to the Heavenly Banquet.   Jesus, of course, is indicating that if you fed people who really are impoverished and could never repay you, you are creating the Kingdom for these people.  The don’t need to wait until some distant future Kingdom arrives – you can make that Kingdom present right now for them. 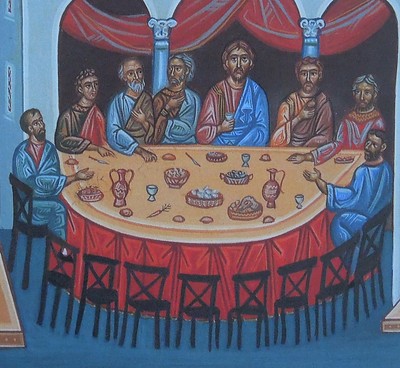 Jesus’ parable, however, explores an idea beyond mutual sharing of food among family and friends.  What if, instead of joining your banquet of mutually feeding friends, they reject your hospitality?  Not only do they not let you give to them, they show contempt for your hospitality.  You can’t even repay them for their kindnesses.  They show complete disdain for your good sense and generosity.  They insult you to your face by refusing your hospitality.

The proper response of the host towards his or her invited guests who contemptuously decline the invite is not the point of the parable.  The host chooses to ignore the invitees and honored guests, and instead shares the banquet exactly with those who have not shown generosity towards the host, who could not show such hospitality and who could never repay the hospitality.   The host is miffed and embarrassed by the empty banquet hall, so decides to fill it for his own self esteem – no matter the motive, he turns the banquet which normally is just repaying friends into a banquet of the Kingdom by inviting in people who he has never cared about and who can never repay him. 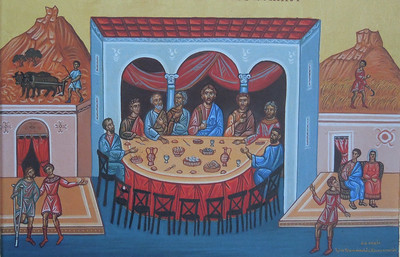 It is good for parishioners to enjoy each others company and to want to be in the company of their fellow parishioners.  They will experience godlikeness when they open their doors to those they least imagine want to come in.  They will show that they know how to make the Kingdom of God present for the least of Christ’s brothers and sisters.  They will be participating in the Messianic Banquet, making Christ present for all those who choose to attend.  Christian love feasts aren’t events for our friends to admire our homes and culinary skills, but rather events of the Kingdom of God in which people experience grace, unearned and undeserved.